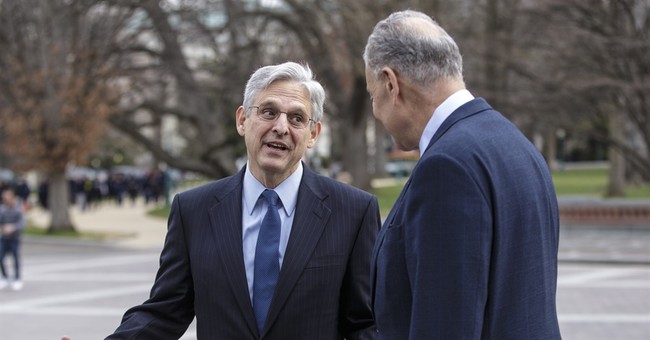 On March 17, CBS This Morning grilled Sen. Jeff Flake (R-AZ) on the Republican Party’s decision to hold the line on the Merrick Garland nomination until a new president is elected. Gayle King asked if this fight placed the GOP in a bad light, while Norah O’Donnell wondered why the Senate Judiciary Committee wouldn’t hold a hearing for him. Flake said he plans to meet with Garland, but that’s on his own accord (via Newsbusters):

NORAH O’DONNELL: Republican Jeff Flake of Arizona is a member of the Senate Judiciary Committee. He is among a handful of Republicans who have agreed to meet the nominee, Judge Merrick Garland. Senator Flake is with us from Capitol Hill. Senator, good morning.

SEN. JEFF FLAKE [R-AZ]: Thanks for having me on.

O’DONNELL: You have broken with other Republicans and said not only would you meet with the President's nominee, you would consider voting for him in a lame duck session. Why?

FLAKE: Well, I think the goal here for Republicans ought to be to make sure that we continue to have balance on the court and there is a concern that since this is the Scalia seat, that if President Obama or somebody else were to name a justice that was decidedly liberal, it would upset the balance on the court. So I think the Republicans are certainly justified in saying we want to wait until a new president can make this nomination.

CHARLIE ROSE: But what if it's before the election and you do not know who’s going to be the president?

FLAKE: Well, I think that’s just a risk that we take and Republicans have decided to do take that risk. And this is an important seat. And like I said, this is the Scalia seat and it would significantly change the balance of the court were a liberal nominee to be appointed in his place.

GAYLE KING: Are you disappointed in the optics of this? Let's take Mitch McConnell's position, who says, “Listen, we’re not even gonna have a hearing.” Some of your other colleagues are saying, “Look, we’re not even going to meet with you.” We hear about the Judge’s credentials, his reputation, his record. Are you concerned that the optics of this look very bad for your party?

FLAKE: Well, I think, like I said, we have every right. It's been since 1878 since we’ve had a similar scenario where a nominee was made in an election year and would be approved by the opposition party in the Senate. So certainly we are justified in waiting. But there are – these are tough optics, I will admit. But it's a risk that you take and this is an important seat. We want to make sure that we maintain the balance on the court.

ROSE: Speaking of tough optics, The New York Times has a story today that says “the escalating fight over filling the court vacancy holds the potential to be a confrontation that also could help determine the winner of the White House, control of the Senate and the ideological balance on the court. It’s that rare Washington fight that washes over all three branches of government.” Do you agree with that?

FLAKE: Yeah, I do, I do. These are high stakes, no doubt. But the court appointees – lifetime appointees to the court – these are important nominations, it’s important consideration. The Senate has advise and consent, we’re given that role, and I think that’s what we’re doing, is exercising that.

O’DONNELL: Another member of the Senate Judiciary Committee, Orrin Hatch, back in 2010 when the President made one of his last picks for the Supreme Court, called Merrick Garland a fine man, a consensus nominee someone who he would help gather Republican votes to vote for him. So what’s changed now? Isn't this just politics?

FLAKE: Oh, I don't think anything has changed with regard to Merrick Garland. And let me just say that I've talked to others on the court and I hear nothing but good about him.

O’DONNELL: So why wouldn't you give him a hearing?

O’DONNELL: Why not give him a hearing, vote him up or down if he’s a fine man, if he is qualified, why not at least just give him the hearing?

FLAKE: Like I said, I plan to meet with him, but that’s decision I make on my own.

First, President Obama’s behavior during his swing through Latin America, doing the wave with Cuban dictator Raul Castro while watching a baseball game and doing the tango in Argentina, is the epitome of bad optics following the devastating terrorist attack in Brussels last week, which left at least 30 dead and hundreds wounded. Second, Flake is meeting with Garland, so is the SCOTUS wall faltering with the GOP? He isn’t the only one.

Senator Patrick J. Toomey, a Pennsylvania Republican facing a difficult re-election fight in a Democratic-leaning state, said Wednesday that he would meet with Judge Merrick B. Garland, an apparent response to calls for him to consider President Obama’s Supreme Court nominee.

One day after Pennsylvania’s other senator, Bob Casey, met with Judge Garland, Mr. Toomey said that at the request of White House officials he would sit down with the nominee as a courtesy. But Mr. Toomey emphasized that he had not changed his mind about opposing Judge Garland’s confirmation to replace Justice Antonin Scalia, who died last month.

“The vacancy left by Justice Scalia’s passing will not be filled until after the American people weigh in and select a new president, and I believe that is the best approach for deciding whether to alter the balance of the Supreme Court,” he said in a statement. “I plan on making that clear to Judge Garland when I meet with him.”

Mr. Toomey joins a handful of other Republican senators who have said they would meet with Judge Garland despite their opposition to his nomination. Their offers have sounded more like gestures of modest hospitality than concessions, however. Some of them, including Senators Kelly Ayotte of New Hampshire and Mark S. Kirk of Illinois, are also facing difficult re-election bids.

Sen. Jerry Moran (R-KS) recently broke from the herd, saying that there should be hearings for Garland (via WaPo):

A third Republican senator broke with party leadership this week to say that Supreme Court nominee Merrick B. Garland ought to be granted hearings, according to a news report.

The Garden City Telegram reported that Sen. Jerry Moran (R-Kan.) told a small group gathered in a Cimarron, Kan., courthouse on Monday that GOP senators “should interview Garland and have a hearing on his nomination,” in the paper’s words.

“I can’t imagine the president has or will nominate somebody that meets my criteria, but I have my job to do,” Moran said, according to the report. “I think the process ought to go forward.”

Another Kansas paper, the Dodge City Daily Globe, reported that Moran was even more explicit in comments to a Rotary Club there: “I think we have the responsibility to have a hearing, to have the conversation and to make a determination on the merit,” he said.

So, what’s going on here? Why would GOP senators who have zero intention of voting for Garland, want to meet with him–or say he deserves a hearing? It comes off as a colossal waste of time, egregiously inauthentic, and one of the many ways legislators can say they’re doing something while actually doing very little. It’s a photo-op; a facet of the Washington gymnastics­–the process of finding political escape hatches to give lawmakers an out if things go sour–that New Jersey Gov. Chris Christie so eloquently discussed on the campaign trail and in the debates before his candidacy imploded after New Hampshire. In this instance, he’s right. Yes, these senators can tell voters back home that they met with Garland, but they know his nomination will probably fail on a party line vote. This is a rather grotesque game of prevarication that allows legislators to remain unaccountable, though this scenario is quite transparent.

For Toomey, one could see why he would meet with Garland. He needs to show he isn’t totally beholden to the Republican leadership; that he’s a maverick of sorts. Hence, his infuriating breaks with the GOP on gun control post-Newtown. At the same time, it could yield some significant dividends in the collar counties around Philadelphia, which is dotted by moderate Republicans, who will decide his political fate, come November. He won Bucks County in 2010­–and he needs to win it again, along with strong showings in neighboring Montgomery and Delaware Counties, if he’s to be sworn in for another six-year term in January of 2017. With increased turnout and Clinton on the ticket, this could be difficult, though Pennsylvania Democrats are having issues of their own finding someone to challenge him–and Toomey’s in decent shape in the polls, especially if former Rep. Joe Sestak, who ran against him in 2010, manages to win the Democratic primary. Toomey has led in almost every poll taken in their head-to-head matchups. Moreover, national Democrats are still mad that Sestak remained committed to mounting a primary challenge to the late Sen. Arlen Specter (D-PA), who had just recently changed party affiliation, which cost the Democrats a Senate seat. Nevertheless, that independent streak fails in this fight since Toomey said he’s not voting for Garland. Hard to sell the whole “my party wouldn’t budge, so I decided to meet him” story for future town hall events. Or, maybe he’s confident that Sestak will win the Democratic Senate nomination, wherein he’ll beat him again, this time handily.

While the optics of digging in to fight the Obama White House on Garland isn’t bad, the notion that a handful of GOP Senators meeting with the nominee is somewhat odd, given the politics of the situation. It might cause some internal headaches for McConnell that he isn’t in control of his own caucus, but I’m just throwing that out there. What is bizarre is to meet with someone whom you have no intention on supporting in the long run. It’s insulting to the nominee, and could make the rest of the party look like they’re desperately trying to smooth over their rigid stance on blocking Garland. The GOP knows it’s in the wrong and grossly playing politics with the Court. That’s how this will come off in some publications. Not sure about the walls actually cracking in the SCOTUS fight, but the appearance sure looks like it.