McCain Could Be Fighting For His Political Life This Year 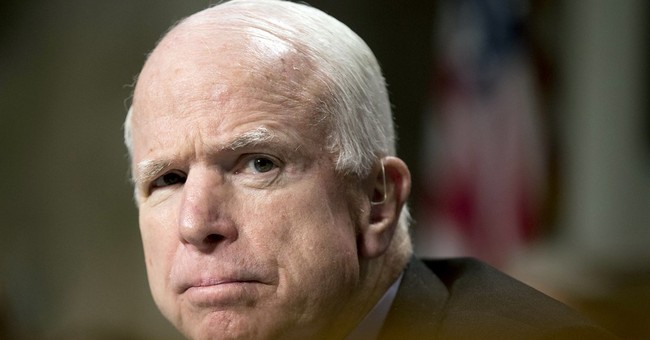 In 2010, conservatives tried to boot Sen. John McCain (R-AZ) by having former congressman J.D. Hayworth mount a primary challenge; it failed. Now, as we get into the thick of the 2016 election cycle, Sen. McCain once again is fighting for his political life, but he doesn’t have the war chest he had six years ago. McCain had access to nearly $20 million from his failed 2008 presidential campaign. Moreover, with nearly 100 percent name recognition, he’s running neck-and-neck with Democratic challenger Rep. Ann Kirkpatrick. The latest Real Clear Politics average has McCain up 5 points, but the two previous polls on this race had him up within the margin of error (via the Hill):

“The basic problem for John McCain is the same kind of thing that faces a lot of incumbents right now. He’s been there a long time. People are leery of Washington. They don’t like Washington,” said former Republican Rep. Jim Kolbe, who served 18 years alongside McCain in Arizona’s congressional delegation.

McCain’s path to victory is complicated by the likelihood the GOP ticket will be headed by Donald Trump, who has an overwhelmingly negative rating among Hispanic voters, a powerful and growing electoral bloc in Arizona.

Trump has scheduled three events in Arizona Saturday with an eye on the winner-take-all presidential primary Tuesday. He will campaign with Maricopa County Sheriff Joe Arpaio, whose get-tough approach to illegal immigration has made him a national lightning rod.

I don’t see how Donald Trump helps any incumbent Republicans. I think he’s a drag on the ticket,” Kolbe said.

While it’s too early to tell just how serious a threat his Democratic opponent will pose, McCain’s taking it seriously. He plans to work around the state over the March recess to shore up his relations with potential voters.

Notably, he will skip the Trump rallies in Phoenix, Fountain Hills and Tucson.

McCain held town halls Friday in Mohave County in the sparsely populated northwestern corner of the state with a local electric coop and one with the chamber of commerce in Bullhead City.

Next week he’ll travel to the White Mountains in the west to hold several events with fellow Sen. Jeff Flake (R-Ariz.), whose family is from the area.

The following week he’ll travel through Phoenix, Tucson, Sierra Vista and Prescott, with several other stops along the way.

“It will be a tough race. I think it is very hard to predict this year because of all of the unique elements of this political year both on the Democratic and particularly the Republican side,” said former Sen. Jon Kyl (R-Ariz.).

“That said, I don’t know that I’ve ever seen Sen. McCain more energetic and engaged in a campaign effort than he is this time. He understands it’s a very unpredictable year. He has seen what’s happened to other candidates who have not taken their re-election seriously,” he added.

Kirkpatrick, who raised $1.8 million in 2015, more than any other Senate Democratic candidate in state history, according to her campaign, will make every effort to tie McCain to Trump.

“With the really divisive and frankly racist comments that Trump has made about immigrants, he deserves condemnation,” Kirkpatrick said. “We can’t just look the other way. And yet John McCain has come out over and over and over again, saying that he will support Trump if he is the nominee.”

The McCain camp dismissed the early polls, but the senator will need the support of the state’s conservative elements who have been appalled by the incumbent Republican; the Maricopa County Republican Party censured him in January of 2014 for cozying up too much with liberal Democrats:

As leaders in the Republican Party, we are obligated to fully support our Party, platform, and its candidates. Only in times of great crisis or betrayal is it necessary to publicly censure our leaders. Today we are faced with both. For too long we have waited, hoping Senator McCain would return to our Party’s values on his own. That has not happened. So with sadness and humility we rise and declare:

Whereas Senator McCain has amassed a long and terrible record of drafting, co-sponsoring and voting for legislation best associated with liberal Democrats, such as Amnesty, funding for ObamaCare, the debt ceiling, assaults on the Constitution and 2nd amendment, and has continued to support liberal nominees;

Whereas this record has been disastrous and harmful to Arizona and the United States; and,

Whereas Senator McCain has campaigned as a conservative and made promises during his re-election campaigns, such as the needed and welcomed promise to secure our borders and finish the border fence, only to quickly flip-flop on those promises; and

Whereas McCain has abandoned our core values and has been eerily silent against Liberals, yet publicly reprimands Conservatives in his own Party, therefore

BE IT HEREBY RESOLVED that the Maricopa County Republican leadership censures Senator McCain for his continued disservice to our State and Nation, and

BE IT FURTHER RESOLVED that until he consistently champions our Party’s Platform and values, we, the Republican leadership in Arizona will no longer support, campaign for or endorse John McCain as our U.S. Senator.

So, yes, it is maybe too early to read the tea leaves, but it’ll be interesting to see how McCain will mend the fences with conservatives in his state. At the same time, there are a million factors that could tilt the race in either direction, though Trump is certainly not going to help McCain’s re-election prospects.