Biden, Did You Forget That You Called Mexico A ‘Dysfunctional Society’? 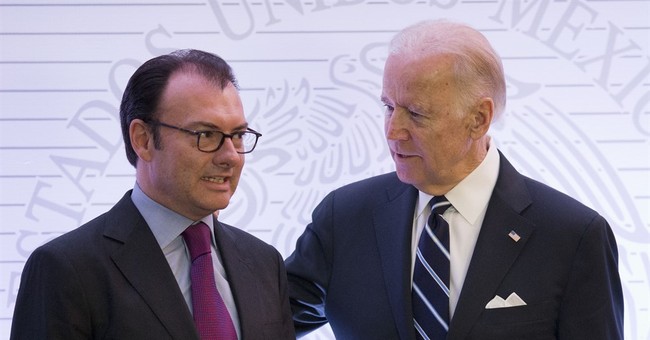 Last week, Vice President Joe Biden was in Mexico for economic talks, where he felt obliged for some of the campaign rhetoric directed towards the Mexican people (via CNN):

Speaking in Mexico City, Vice President Joe Biden on Thursday came close to offering an apology for comments made by Republicans about Mexico and Mexican immigrants on the campaign trail.

"I almost feel obliged to apologize for some of what my political colleagues said," Biden said alongside Mexican President Enrique Pena Nieto. "It's a heated campaign season and I just want you to know, Mr. President, that the most heated rhetoric you've heard from competitors for the nomination for president is not who we are as the American people. It is not the view that is the view of the majority of the American people. It's the exact opposite. It's the opposite view."

So, does that mean the vice president is also sorry for his remarks about our neighbor to the south when he said they live in a “dysfunctional society” in 2007 (via NYT):

Joe Biden shared his views on illegal immigration with an Iowa crowd, saying that the solution starts with big changes in the Mexican economy.

“They’re being irresponsible. This is the second-wealthiest nation in the hemisphere – we’re not talking about Sierra Leone,” the Democratic presidential candidate said. “This is a dysfunctional society.”

In 2001, during a Senate Foreign Relations Committee hearing on anti-narcotics operations, then-Sen. Biden again said that Mexico has a “dysfunctional society”:

“[I] think you and I and a few others finally have everybody's attention here. I mean it sincerely because of a confluence of certain things that have happened, some of them very good like the two new leaders in Mexico and Columbia. … If you study any of these countries you realize that they end up where they are in large part because of dysfunctional systems they have, because of dysfunctional societies relating to access to opportunity within those societies.”

So, does Donald Trump say things that are over the top about Mexicans? Yes, but the vice president is playing holier than thou regarding his own remarks about the country. There no way to positively spin being called dysfunctional.