Who Will Win Sheldon Adelson’s Money? 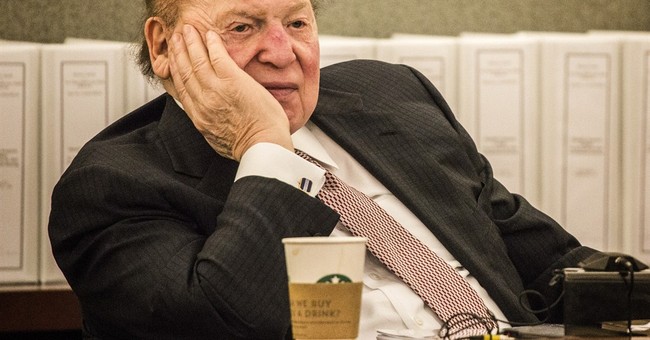 Casino magnate Sheldon Adelson doled out $100 million in 2012, but he’s been much more frugal with his campaign contributions as of late. He’s given some money to various candidates this cycle, including Sen. Ted Cruz (R-TX) and Sen. Marco Rubio (R-FL), but far from the mega checks he signed to former House Speaker Newt Gingrich. The Adelsons plan on caucusing tonight, and folks close to the reportedly temperamental billionaire told Politico that he could be leaning towards Rubio, while others have speculated that he will sit it out until an undisputed nominee occurs:

While Adelson, whose political involvement is largely animated by his support for Israel’s defense, is thought to distrust Trump on the issue, an Adelson adviser suggested his boss had no plans to spend big on behalf of — or against — any candidate in the tumultuous GOP primary.

"I don't see any involvement until there is a nominee," the adviser told POLITICO.

If Adelson sticks with that plan — a big "if" given his reputation for writing massive checks with little warning — it could remove a major source of anti-Trump cash and also could hamper Republicans’ general election chances up and down the ballot.

An Adelson endorsement of Rubio and a huge super PAC check had been expected as far back as October.

“If you had told me months ago that he would not have made a major play in the presidential race by this point, I would have been shocked,” said a Republican fundraiser who has met with Adelson. “I thought he was going to do it after that Vegas debate,” said the fundraiser, referring to the Republican presidential debate held at Adelson’s Venetian Resort Hotel and Casino in December.

Adelson watched that debate from a seat about eight rows from center stage, and multiple sources present described his reactions and body language as more supportive of Rubio than the other candidates.

The sources question whether Adelson is withholding support from Rubio because of the assiduous outreach from Cruz’s allies and the senator himself. While considering his presidential bid, he met for two hours with Adelson at New York’s St. Regis Hotel, after sitting with the couple at the Zionist Organization of America dinner.

“Miriam [Adelson's wife] is still singing Cruz’s praises,” said a conservative source who has interacted with the couple, adding that Cruz’s allies have made overtures directly to her. “If Rubio struggles, I think there’s a really good chance that money goes to Cruz world,” the source said.

Rubio allies detected a break in the Adelson derby this month when the Las Vegas Review-Journal, which the Adelson family recently purchased in a mysterious deal, endorsed the Florida senator, citing his electability and “deep personal connections” to Nevada.

As the Nevada Caucuses reportedly descend into chaos, with reports of double voting and caucus locations running out of ballots–we could have to wait a little while longer which candidate, if any, would benefit from the massive reservoir of cash he’s withholding. If Mr. Adelson is not convinced by Mr. Trump’s candidacy, he’s wasting precious time in not funding the anti-Trump candidate. At the same time, Cruz, Rubio, and the other candidates who are left need to make some hard decisions about their prospects–and that’s not in the tea leaves as of late.