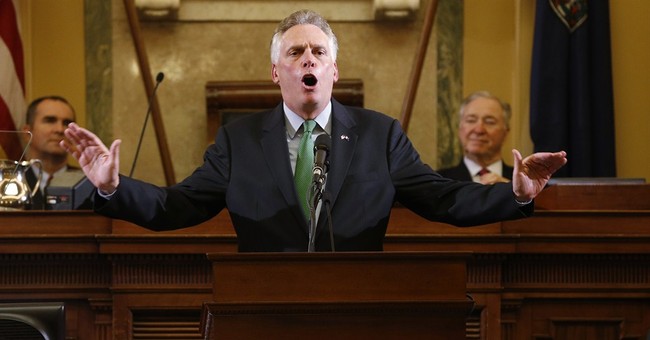 It’s not often that I give Democrats a pat on the back on policy, especially Second Amendment issues, but Gov. Terry McAuliffe (and the NRA) certainly deserves a nod with his announcement that he will restore concealed carry reciprocity agreements with 25 states. These agreements were expected to be revoked on February 1 in accordance with Attorney General Mark Herring’s unilateral action on this issue prior to the Christmas holiday. As I mentioned yesterday, there are some concessions:

“This bipartisan deal to keep guns out of the hands of domestic abusers and people who cannot pass background checks will save lives,” said Governor McAuliffe in a statement about this deal. “Give and take is essential to every negotiation, but the balance of this deal changes Virginia law permanently in ways that will keep guns away from people who would use them for harm. I want to thank all of the leaders who put politics aside and stood up for this bipartisan compromise to make our families safer.”

Republican State Sen. Bryce Reeves said, “I am happy to have been able to work with my colleagues to reach agreement on this deal today, which includes protecting the rights of 421,000 Virginians who hold concealed carry handgun permits,” while Democratic Delegate Kathleen Murphy added she was happy to find “common ground” with Republicans that will help reduce gun violence.

Some might not agree with the concessions, especially since pro-gun lawmakers were gathering enough votes to override an expected McAuliffe veto on the proposed total recognition legislation this session. The original bill would have honored valid carry permits from individuals who are at least 21 years of age from other states. Also, it would “further require the attorney general to enter into a reciprocity agreement with any state that requires an agreement in order to recognize Virginia concealed handgun permits.” This is what the National Rifle Association was going to work on with Virginia lawmakers. At the same time, most of these provisions fall within existing federal law, or are heavily supported by law-abiding gun owners. As Bob Owens at our sister site Bearing Arms noted, the protective order portion isn’t a major concession.

“It was very much a minor concession in line with what most Republicans support. No one wants an violent abuser to have access to firearms,” he wrote.

Yet, while there may be some discontent with gun rights advocates over this deal, the anti-gun left reacted with anger over the proposed agreement. Laura Vozzella of the Washington Post reported a sense of betrayal among the anti-gun crowd:

Gun-safety activists reacted with fury on Friday to a deal Gov. Terry McAuliffe struck with Republicans to recognize most out-of-state concealed-handgun permits, fanning out across the Capitol, placing hundreds of calls and writing to the Democrat who won office two years ago bragging about his “F” rating from the National Rifle Association.

“Governor McAuliffe should reconsider this dangerous gift to the gun lobby,” said John Feinblatt, president of Everytown for Gun Safety, which in the fall poured more than $2 million into two state Senate races in a failed attempt to help McAuliffe’s party take control of the chamber.

While the NRA has praised the deal, gun-safety advocates who just last week rallied on Capitol Square with the governor described it as a betrayal.

Yes, it is a bit awkward given that these gun control advocates rallied in support of Herring’s actions on January 18.

Nevertheless, what was announced today was very much in line with what VCDL president Philip Van Cleave said on January 18 at his organization’s lobby day. He noted that there are many issues that differentiate the parties; gun control shouldn’t be one of them. This is one of our oldest civil rights. It’s our heritage, and Democrats and Republicans should come together to embrace it, expand it, and protect it.

The National Rifle Association's Chris Cox said, he "commends leaders in the Commonwealth for moving forward on a bipartisan package that will benefit Virginia citizens."

Reversing the gutting of carry agreements in exchange for not allowing wife beaters have guns, state police at gun shows (I already see them there regardless), and prohibiting persons from obtaining permits in other states when they were originally rejected in Virginia, is a win. We should be celebrating.

Herring takes high road: "I'm encouraged to finally see a bipartisan conversation about how we can reduce gun violence ..."