Oh Goodie: Obama Expected To Do Something On Gun Laws After Christmas 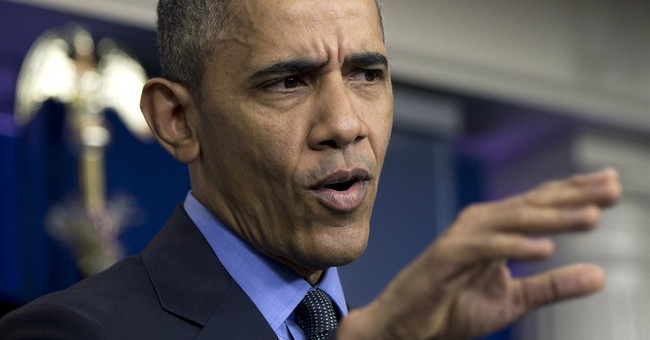 Well, if there’s one thing that was left out of the president’s final press conference of the year, it was gun control. There have been rumblings that some policy initiative coming from this administration on guns could be announced after the holidays (via Roll Call):

So far, the White House is keeping its plans — and the details of its legal review — under wraps. But sources say the administration is zeroing in on the definition of just who is in the gun sales realm.

“What we expect is that they are going to better define what it means to be ‘in the business’ of selling firearms,” said a source with knowledge of the administration’s thinking. Congressional aides say they are hearing similar rumblings.

Under current laws, only licensed firearms dealers are required to conduct background checks on those trying to buy guns. What’s more, the only individuals considered “in the business” are ones who must apply to be dealers — but that leaves countless people selling firearms without registering.

“Currently many people, even those who sell tons of guns each year, just say that they aren’t ‘in the business,’ or ‘it’s just a hobby,’ in order to get out of the licensing and its attendant background check requirement,” the source told Roll Call. “Because what ‘in the business’ means is so unclear, it’s very difficult and thus very rare for people to be prosecuted under this standard.

A White House spokesman declined to comment on the status of the review and the expected coming executive action. Instead, he referred a reporter to Wednesday’s briefing, during which Earnest called GOP lawmakers’ resistance to changes the “central problem” in the administration’s push to enact tougher gun laws.

This is definitely aimed at the so-called gun show loophole, where the president was reportedly looking into taking executive action to close it. As Roll Call wrote, dealers with federal firearms licenses are required to perform background checks on all purchases. With any Internet sale through a FFL, as Bud’s Gun Shop noted, a background check also needs to be conducted.

Yes, private sales exist, they’re a miniscule proportion of all sales (in the single digits), and they’re mostly relegated to family members (i.e. fathers passing their firearms down to their sons). And the statistic that 40 percent of all gun sales are performed without a background check has been thoroughly debunked–twice. Clinton and Obama have peddled this false claim. Most law-abiding citizens (and by most, I mean like 99.9 percent), buy their firearms from licensed dealers and undergo a background check.

Those dealers who are shady and knowingly give firearms to people who shouldn’t have them are in violation of the law People with no criminal backgrounds (yet) that buy guns for criminals (straw purchases) are also breaking the law. The penalties for which could land you behind bars for up to a decade. There are already laws against any skirting of the legal process to buy firearms. The debate we should be having is how to navigate the legal waters in which we can better incorporate mental health into our background check system. We should also be looking to reform how we treat and report the mentally ill. The American people agree that mental health is at the core of the recent string of mass shootings.

Let’s focus on that rather than nonsensical initiatives that only infringe on Americans’ constitutional right to own firearms. The Obama administration’s push to incorporate those on terror watch lists from buying guns, wherein we eviscerate due process of law, just shows where the left’s intent on this issue truly rests.

Most people are these lists are not citizens and can’t buy guns, almost 300,000 have zero ties to terrorism, and only about 10,000 Americans are on the lists–most of them either placed their by accident or have names mismatched. That’s why you hear stories about 18-month old babies being on these secretive government lists that virtually prevent wrongly placed persons zero recourse to readdress their situation, which is based on mere suspicion. It’s scary stuff, which is why even liberal news outlets, like the LA Times, have said they think Americans on terror watch lists should be able to buys guns due to the gross constitutional violations within this Bush-era program.

In the end, White House senior adviser Valerie Jarrett has submitted something to expand background checks. This means gun and ammo sales are probably going to spike–again.