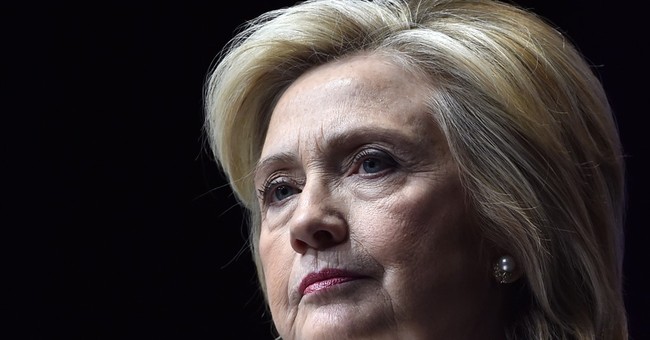 A new USA Today/Suffolk poll shows that Clinton maintains her double-digit lead nationally among Democratic primary voters. She currently leads the field with 41 percent of the vote, followed by Sen. Bernie Sanders at 23 percent, and Vice President Joe Biden at 20 percent, though he hasn’t officially announced his 2016 intentions. We may have to wait a little longer regarding the vice president, as it was announced that he wouldn’t be part of the first Democratic debate.

Clinton retaining the top spot is about the only good news for the former first lady. Real Clear Politics, which averages the polls, found that Clinton had led by 58 percent on August 1. That dropped to 47 percent by the end of the month, and now she’s barely breaking 40 percent. You can see the decline here:

Also, those surveyed showed–by a three-to-one margin–that Clinton’s use of a private email system would impact her in the general election. As for the general feel of the candidates, there are plenty of Bern victims, who say he has a message that resonates with them. That was abundantly clear in the Des Moines Register/Bloomberg poll in August, where 96 percent of Sanders’ supporters are supporting him because they like his views on policy, not because he’s the anti-Clinton candidate. Additionally, it found Hillary has lost a third of her support in the state since June.

As for the favorables/unfavorables, the picture was still grim (via USA Today):

The controversy over her decision to use a private email server instead of the government system when she was secretary of State is hurting her, although more among Republicans than Democrats. Six in 10 of those surveyed say the issue bothers them and even more, 70%, predict it will hurt her in a general election.

Even about one-third of Democrats and two-thirds of independents are disturbed by the controversy, as well as nearly nine in 10 Republicans.

Overall, 52% say they're bothered by how she handled the 2012 attacks in Benghazi, Libya, that left four Americans dead, and by the explanation she has given in the aftermath. Nearly six in 10 say that would be a liability in the general election.

Asked for word association the top four were "liar," "dishonest," "untrustworthy," and "fake." Those aren’t the characteristics that are good selling points for one seeking the presidency, nor are they complimentary to the other words­ people have said to describe the former Secretary of State–those being "smart," "knowledgeable," and "good." Can one be a dishonest, good leader? Can someone exhibit strong leadership qualities while being deceitful?

Either way, a few things are clear. One, the Clinton campaign underestimated the impact the use of her private email system would have on voters; they didn’t expect this fiasco to last this long; and they certainly didn’t think voters would either care or pay attention to this blatant violation in government recordkeeping. After all, this is the Clintons, who are already polarizing, especially Hillary–and this email kerfuffle touched upon every aspect that people dislike about them, which is why "dishonest," "liar," "deceitful," and "untrustworthy" are so prominent when asked to describe her.