Open Thread: Could The Ghosts of Hewlett-Packard Come Back To Haunt Carly? 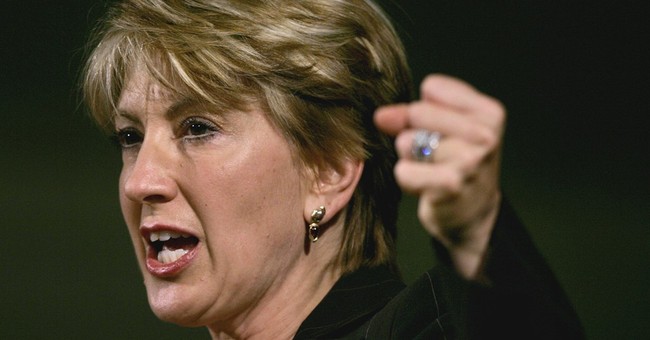 Carly Fiorina has sling shot into top tier status. She’s another non-politician, the others being Donald Trump and Dr. Ben Carson, that’s capitalizing on this anti-establishment election cycle. Politico reported that her campaign is doing what most would do in this situation: she’s trying to grow her fundraising base. She’s already nabbed one of Walker’s top donors now that the Wisconsin governor has decided to drop out. Yet, will the ghosts of Hewlett-Packard come and sink Fiorina as they did in 2010? Moreover, with the Iran deal and foreign policy proving to be hot issues for primary voters, what will they make of Hewlett-Packard reportedly earning millions from Iran when she was their chief executive officer?

Let’s go back to 2010. Fiorina is battling breast cancer and incumbent Republican Sen. Barbara Boxer in California’s Senate race. For any Republican, running in a deep blue state usually means you’re relegated to sacrificial lamb status. Moreover, it’s an incredibly expensive venue to run a statewide race, let alone the insane Democratic voter registration advantage. Yet, Fiorina was somewhat close to Boxer in August of that year, until the latter’s campaign ran an ad hitting Carly on her HP record. Carly fell like a rock by September, which was when this ad was launched:

In 2010, Fiorina was running surprisingly close to California Sen. Barbara Boxer (D), who was struggling in a strong election cycle for Republicans nationally. Then, Boxer ran this ad focused on Fiorina's time at the helm of HP.

The commercial notes that Fiorina laid off 30,000 workers at HP while feathering her own nest (the ad's narrator says she tripled her salary) and buying a "million-dollar yacht" and "five corporate jets." It went up on TV in the middle of September and effectively ended Fiorina's chances.

Chris Cillizza, who rehashed this relevant part of Fiorina’s history, noted that this could torpedo her again, but at the national level. Then, there’s the Iran transaction that was worth $120 million:

Fiorina often cites her time as a corporate executive as a credential for running for president and said in July she would back away from the Iran deal if elected and renegotiate. She has also warned that European countries, as well as Russia and China, are rushing “to open the Iranian economy.” She has also accused Iran of cheating on sanctions.

What Fiorina never mentions on the stump is that while she was in charge, Hewlett-Packard used a European subsidiary and a Middle East distributor to sell hundreds of millions of dollars of printers and other computer equipment to Iran.

After the Globe article came out, the Securities and Exchange Commission, which investigates violations of sanctions, wrote HP a letter inquiring about the Iran business. HP responded by saying that over $120 million worth of its products had been sold to Redington Gulf for distribution in Iran by a foreign subsidiary based in the Netherlands. Because these sales took place through a foreign subsidiary, HP denied violating sanctions law.

When Fiorina was running against Barbara Boxer for California Senate in 2010, her campaign denied that she had any knowledge about HP’s business in Iran. "It is illegal for American companies to do business in Iran," her spokeswoman, Beth Miller, said at the time. "To her knowledge, during her tenure, HP never did business in Iran and fully complied with all U.S. sanctions and laws."

On September 20, Fiorina addressed this issue on Fox News Sunday with Chris Wallace saying she didn’t know about the transactions, which built a 41 percent market share in Iran:

"First, HP, you need to remember, was larger than each of the 50 states," Fiorina said. "It's a larger budget than any one of our 50 states, and a global enterprise. And so it's impossible to ensure that nothing wrong ever happens. The question is what do you do when you find out."

“Are you saying you didn’t know about it?” host Chris Wallace asked.

Wallace asked Fiorina why HP had named Redington Gulf its "Wholesaler of the Year" award in 2003 if the company wasn't aware of its sales to Iran, Fiorina again deflected blame.

On Tuesday, Fiorina again defended herself from the Iran sales, telling Iowa radio host Simon Conway that blaming her for the Iran transaction would be like people blaming radio hosts for the actions of his listeners:

Fiorina bristled when Conway said her answer reminded him of President Obama “talking about various issues, saying, ‘Yeah, I found out about it when I saw it in the newspaper just like you.”

“No, no, no, Simon, that is a completely unfair comparison,” Fiorina responded, adding that the subsidiary, which is called Redington Gulf, was “like a customer” and that blaming her for its wrongdoing would be like blaming the host for the wrongdoing of a listener.

As for HP itself, the acquisition of Compaq, that some commentators thought was a disaster, wasn’t necessarily a profit killer. In fact, it partially contributed to doubling the company’s revenues (via Bloomberg):

When the board pushed Fiorina out on Feb. 10, 2005, things weren’t looking so great. HP’s stock, as was the case at almost every tech company, was still below its 1999 levels. Among the four rivals, only Sun had done worse. My then-colleague at Fortune magazine, Carol Loomis, had just written a cover story titled “Why Carly’s Big Bet Is Failing.”

Then, not longer after Fiorina left, the bet started paying off. Part of the initial rise in HP’s stock price was probably relief that the contentious Fiorina era was over. And much of the company’s stock market success during the next five years can be attributed to Mark Hurd, the relentless cost-cutter who took over as CEO about a month after Fiorina left. But Hurd was for the most part executing the strategy that Fiorina had laid out. Her plan to make HP a credible competitor for IBM worked far better than the strategies of McNealy and Dell and enabled HP to modestly outpace IBM as well. Fairly assigning credit between Fiorina and Hurd here is impossible, but it seems clear that (a) Fiorina didn’t leave behind a basket case of a company and (b) the Fiorina-Hurd era was -- again, by the metric of total shareholder return -- a relative success.

So, will HP, and now the Iran intrigue, sink Carly? She may have some wiggle room regarding Compaq, but the cutting of 30,000 jobs in an economic climate that’s still less than stellar is unsettling. As for the Iran sales, she’ll have to do better on answering those questions. As liberal writer Dana Milbank suggested, she might be peaking too soon as CNN’s “flavor of the week.”

Editor's note: The original post came off as if the alleged Iran dealings built up HP's overall market share–it was a just the market share in Iran. We've updated the post for clarity on that point.