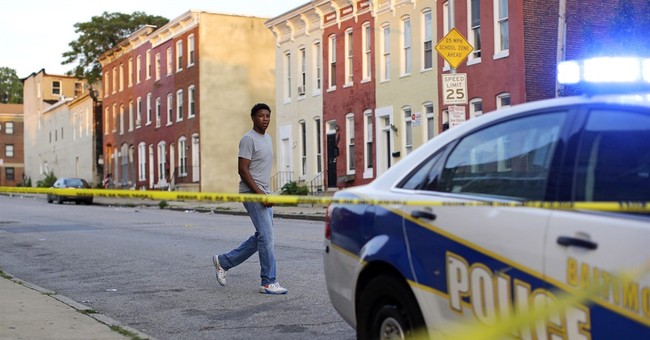 Things are getting bloody in America’s cities. Homicide rates are spiking in many U.S. cities. There are different factors that are contributing to the violence, one of them being stringent anti-gun laws, which keep law-abiding citizens disarmed and vulnerable while the criminal element’s access remains unmolested. Yet, The New York Times reported that one of the demographics driving the spike in murder rates isn’t out of the ordinary. It’s young men relying on violence to settle disputes:

Cities across the nation are seeing a startling rise in murders after years of declines, and few places have witnessed a shift as precipitous as this city. With the summer not yet over, 104 people have been killed this year — after 86 homicides in all of 2014.

More than 30 other cities have also reported increases in violence from a year ago. In New Orleans, 120 people had been killed by late August, compared with 98 during the same period a year earlier. In Baltimore, homicides had hit 215, up from 138 at the same point in 2014. In Washington, the toll was 105, compared with 73 people a year ago. And in St. Louis, 136 people had been killed this year, a 60 percent rise from the 85 murders the city had by the same time last year.

Law enforcement experts say disparate factors are at play in different cities, though no one is claiming to know for sure why murder rates are climbing. Some officials say intense national scrutiny of the use of force by the police has made officers less aggressive and emboldened criminals, though many experts dispute that theory.

Rivalries among organized street gangs, often over drug turf, and the availability of guns are cited as major factors in some cities, including Chicago. But more commonly, many top police officials say they are seeing a growing willingness among disenchanted young men in poor neighborhoods to use violence to settle ordinary disputes.

The Baltimore Sun had a profile piece on all of the 45 murders that occurred in July, which made that month one of the deadliest in the city’s history. Things have become so bad that federal agents are now working with Baltimore homicide units to curb the violence:

Taylor Street and Delvin Trusty began dating in high school after he sent her a message on social media. They attended prom together, and three years later were expecting their first child.

When she gave birth this month, she was surrounded with support, including Trusty's parents and brother, and her mother, sister and cousin — but not Trusty.

Their daughter, a 9-pound, 11-ounce girl named Avah, was born one month to the day that Trusty was gunned down in Northeast Baltimore. "I text his phone still," Street said. "I send pictures of the baby."

Trusty was among 45 people killed in Baltimore in July, a toll that matched the deadliest month in the city's modern history and came amid a surge in violent crime surge that followed Freddie Gray's death. The last time 45 people were killed in one month was in August 1972, when the city had about 275,000 more residents.

This year Washington D.C. has already surged passed the total number of homicides committed in 2014. So far, the International Business Times  reported that the District has seen a 45 percent increase in homicides, prompting Mayor Muriel Bowser to put “all hands on deck” to combat the rising homicide rates. The article mentioned that officers in administrative roles will be put back on patrol duty, and that the city’s homicide rate is still well below the grim milestone of 479 murders that was reached in 1991.

The Washington Post’s is tracking the number of homicides in the Washington area, which is currently at 172, 105 of which were in the District of Columbia.

Let’s hope law enforcement and community outreach/cooperation can reverse the trend. At the same time, it’s not all doom and gloom. Overall, America is still less violent than it was 20 years ago.