Folks, Biden 2016 Could Be Happening 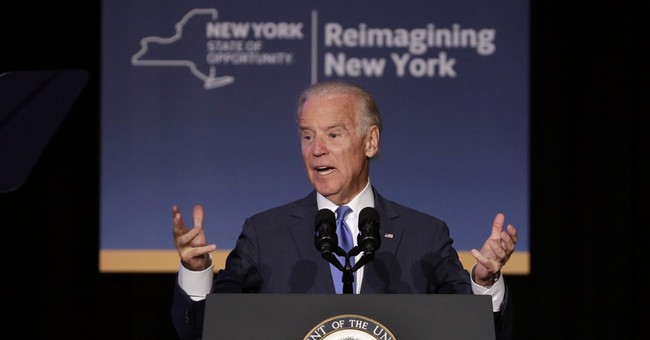 The vice president said he would make his decision in August, and he appears to be getting prepared to announce his 2016 intentions. He’s been using his family vacation time on Kiawah Island, South Carolina to put out some feelers to his top supporters as to whether he should toss his hat into the ring. With Hillary’s favorability dropping and the continued problems over the use of her private email server during her time at State–she recently handed over a (blank) server to the Department of Justice–leaves room for Biden to jump into the fray. He’s got absolutely nothing to lose (via NYT):

…on Wednesday night, he called one of his most outspoken political supporters and wrestled with the question looming over his future: Should he run for president?

In the hourlong conversation with Richard A. Harpootlian, the former chairman of the South Carolina Democratic Party, the vice president did not reveal which way he was leaning, according to a Democrat familiar with the conversation who spoke on the condition of anonymity to discuss a private call. Mr. Biden described the recent death of his son Beau as an “open wound” that had not begun to heal, and was grappling with whether he could devote his full energy to a campaign.

But at the same time, Mr. Biden and those who support him are moving to put the pieces into place for a possible candidacy. The vice president directed Mr. Harpootlian to get in touch with one of his closest political advisers, Mike Donilon, and has been calling other supporters. And he has permitted his advisers to discreetly contact operatives in early nominating states to determine how fast they could organize a campaign.

Mr. Donilon, who has worked for Mr. Biden for decades, spoke this week to Jeff Link, a longtime Iowa Democratic strategist. “He asked me what I was hearing on the ground,” recalled Mr. Link.

Mr. Link said he told him: “Sanders has real energy and people are for Hillary but don’t seem superenthused.”

Both Mr. Donilon and Mr. Biden have, in their conversations, been careful to avoid revealing the vice president’s leanings, according to those have spoken with them. Other uncommitted Democratic operatives in early nominating states have received calls from Greg Schultz, another aide to Mr. Biden.

Biden has no super PAC, campaign staff, or money to launch a presidential bid. It will be a hurdle to gather those resources together, especially since Hillary has poached some of the best pollsters, fundraisers, and analysts in the game, according to the Wall Street Journal. They also noted that top fundraisers would “hedge their bets,” possibly making money the least of Biden’s problems:

Difficult as it might be, the former U.S. senator would come to the race with built-in advantages as an incumbent vice president who has spent decades in politics. Longtime Democratic fundraisers already have said they would be willing to hedge their bets, which could help him raise cash fast.

As a candidate, Mr. Biden could peel off some of the mainstream Democratic support Mrs. Clinton is counting on to hold off Mr. Sanders, an independent who has gained enthusiastic support among the party’s liberal wing. Mr. Biden may also attract a broader constituency in a general election, including rust-belt Democrats, Catholics and white, working-class men, with whom he has some cultural affinity.

Democrats are hemorrhaging support from white working class voters (badly). At the same time, while Hillary’s support among the Obama coalition is strong, it isn’t registering anywhere near the levels the president commands. That block of voters, especially support among black voters, is the reason why the then-Senator had a successful insurgency against the Clinton machine.  It's dubious if Joe could garner that same level of support.  The same especially goes for Sanders who cannot overtake the Clinton juggernaut without better performances with non-white Democrats.

There’s also the age factor: Biden is old. He may have credibility with his years of pubic service, but Hillary is a woman–and it will be hard convincing the Democratic base to vote for another white guy to be the party’s standard-bearer for 2016 at a time when a) liberals like bashing white males b) there’s a female candidate who’s married to a popular ex-president and has the lion share of the cash and endorsements behind her. Oh, and did I forget to mention that she could be the first woman president in American history. This could easily flame out, like Biden’s other past presidential runs. Also, there’s some ammunition that could be used against the vice president–and it doesn’t have to do with his various gaffes. Then again, it's hardly anything that could spark a bloodbath (via Roll Call):

Vice presidents running for president always face difficult challenges balancing their roles as loyal members of an administration and candidates who want to create their own agendas. The fact that Obama is a historic president means Biden’s position is particularly difficult.

If Biden decides to enter the Democratic contest, he will deserve to be taken seriously. But his prospects will still depend on how Clinton performs between now and the first contests in February.

Clinton’s problems remain on the left, but Biden certainly isn’t an automatic heir to progressives who see her as part of the political establishment and have lined up behind Sanders or remained on the sidelines.

Critics of the vice president can point out that he voted for a balanced budget amendment to the Constitution in both 1995 and 1997, and like Clinton and Massachusetts Sen. John Kerry, he voted for the 2002 Iraq War resolution. (Sanders voted against the resolution, while Obama criticized Clinton for her vote during their 2008 contest.)

They could even note that Biden chaired the Senate Judiciary Committee in 1991, when that committee conducted hearings on Clarence Thomas’ nomination to the Supreme Court and referred the nomination to the full Senate, though without a recommendation.

“Biden’s chatty, deferential approach to Thomas did nothing to inspire fellow Democrats on the panel and did not begin to counter the hard-edged attack on [Anita] Hill,” according to 1998’s “CQ’s Politics in America.”

In the Senate, “Bidenmentum” has a lukewarm reception. Many senators that National Journal's Sarah Mimms and Alex Brown spoke with said the same thing: “it’s up to the VP, it’s a personal decision for him.” Given Biden’s 36-yer career in public life, you would think the various relationships Biden has struck up would at least entertain the idea of his candidacy, which is what Mimms and Brown tried to figure out. Then again, Hillary has nabbed 27 Democratic Senators’ endorsements, so it shouldn’t be shocking that the “ridin’ with Biden” mantra hasn’t taken off. Could Biden become the anti-Clinton? No, says Harry Enten at FiveThirtyEight. Veep lacks a base of support:

Biden pulls proportionally from all the Democratic candidates. About 59 percent of Biden voters say Clinton is their second choice — about the same overall level of support Clinton earns among the Democratic electorate. And about 12 percent of Biden backers would go to Sen. Bernie Sanders, a smaller percentage than Sanders’s overall level of support.

Of course, this math could change if Biden enters the race. He might be able to win the backing of Democratic bigwigs who are unwilling to support Sanders but would be open to an alternative to Clinton. And with Biden in the race, Clinton’s (along with the other candidates’) numbers would drop.

But Biden does not have an obvious camp of support right now.

Still, given that this battle for the nomination begins next February, there’s time to build that base of support. That is what HuffPo’s Howard Fineman listed as one of the reasons why Biden might run again. Some of the others included how the VP dislikes how the Clintons have used their "political/money-making machine" to accumulate clout.

“They’re everything he hates about the way politics operates today,” said one friend to Fineman.

I particularly liked the last reason Fineman gave as to why Biden might run again, citing the late Sen. Eugene McCarthy (D-MN), who led the anti-war Democrats during the Vietnam War, “It’s easier to run for president than to stop.”

Another unknown factor is the role of the Obama White House. They so far have been mum on backing Biden. It’s early. Yet, if they side with him, which is a possibility given how badly they see Clinton in handling the various media circuses following her around–all of which is her own doing–then the VP has his seasoned political team, or at least could be pointed in the right direction. But that’s a big if, though not far-fetched. Obama and Hillary were 2008 primary enemies, the Clintons were reportedly bitter over losing to a no-name U.S. Senator from Illinois, who had barely served one-term, in the national contest, and Hillary’s plummeting poll numbers and email fiasco cut into the inevitable narrative about her campaign. If she can’t do it, who else can? Sanders can’t compete in areas where elections are decided, so I guess Biden is the proverbial “plan B.” He’s authentic, he’s got the respect of the party, fundraisers like him, the press love him (though not always in a manner that’s flattering) he’s run point of some key issues (i.e. gun control) for this administration, and he won’t duck from the press–or prevaricate on simple questions.

Yet, even with those awful numbers, Hillary is still remarkably strong in the primary. So, let’s close with Nate Cohn throwing cold water onto the chances of a successful Biden 2016 campaign:

You might not know it if you’re reading the various articles about Mr. Sanders’s rise in the polls, but Mrs. Clinton still holds as strong a position as any primary candidate in history. And oddly, Mr. Sanders and Mr. Biden have helped clarify that strength.

The possibility that Mr. Biden might run for president has led many to imagine that Mrs. Clinton’s sagging support has Democrats on the verge of drafting him into the race. But the reaction from Democratic elites to a possible Biden run has been tepid at best. Major Democratic figures have publicly argued against his candidacy. My colleagues Carl Hulse and Jason Horowitz reported that the skepticism even extends to Mr. Biden’s friends and many Obama 2008 supporters — exactly the sort of people who ought to be most receptive to his candidacy.

Cohn also mentioned how Sanders seems to have hit his ceiling; he can’t expand into the non-white factions of the party. And Hillary’s supposed moderate stance on other issues makes Sanders an unsuccessful candidate to try and wedge into that segment of Clinton’s base.

There are a lot of reasons for Biden to sit this one out. He’s old, the loss of his son, Beau, to brain cancer in May has devastated the family, and the vice presidency is usually the final stop in one’s political career. At the same time, since the VP slot is the last line in his resume right now, why not run? There’s nothing to lose by tossing his hat in the ring. Beau Biden reportedly urged his father to run before his passing, and there could be a chance that Team Obama might get behind the Joe after the president feels he’s done all that he could in the twilight of his presidency.  Nevertheless, there seems to be some threatening aspect to the VP running since Team Clinton is now somewhat worried over his candidacy.

There are a lot of factors at play. Let’s see what happens, but a Biden 2016 could very well be formulating right now.

Last Note: New Yorker's Ryan Lizza with a punch to the gut over Biden 2016.