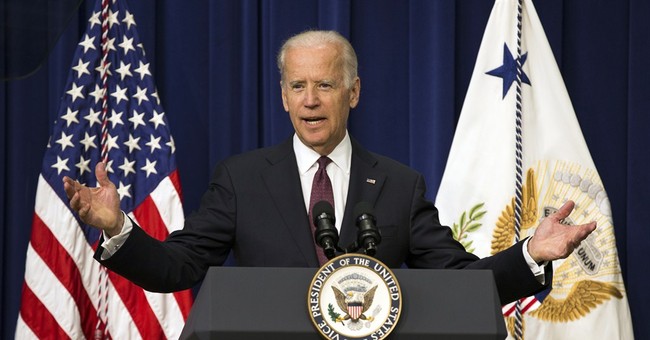 Even with the tragic death of his son, former Delaware Attorney General Beau Biden, from brain cancer in May, sources close to the Vice President say he still could mount a presidential run. The decision will come in August (via US News and World Report):

He plans to announce his decision sometime prior to the beginning of August.

Dick Harpootlian, former chairman of the South Carolina Democratic Party, says Biden previously indicated to him he would likely make up his mind in July. The two last spoke 10 days before Beau Biden's death on May 30.

"I think he was seriously considering it, but he was seriously distracted by Beau being in Walter Reed," Harpootlian says, referring to the medical center outside Washington where Beau Biden had been hospitalized. "I haven't heard anything to convince me to say that it wasn't still something he was thinking about."

A separate source, who asked for anonymity, confirmed that the thinking and timeline remained consistent, even in the wake of the family tragedy.

The 72-year-old Biden on Tuesday made his first public appearance since burying his son, speaking at a clean energy summit in Washington. He made no mention of Beau Biden and even doled out a few jokes.

The vice president continues to field encouragement for a run from his band of loyalists around the country, including Harpootlian, who says he has sent every signal he can to prod Biden to join the race.

"I've not bothered him, but I've talked to several people close to the family," he says. "Based on the dynamic of the race right now, I would encourage him to get in."

While Hillary Clinton remains a sturdy Democratic front-runner, there are some signs of an opening against her. A Suffolk University poll of New Hampshire published Tuesday found Sen. Bernie Sanders, I-Vt., had climbed within 10 points of Clinton. Biden registered just 7 percent.

Harpootlian, who has expressed concerns about Clinton's ability to win the general election, says "the day [Biden] announces, he would be within 10 points of Hillary Clinton in the early primary states."

That might be generous, though. In Iowa, the latest survey showed Clinton ahead of Biden 54 percent to 9 percent.

First, in 2013, Dick Harpootlian garnered some controversy when he said that the Democratic candidate for governor at the time–Vincent Shaheen–would “send Gov. Nikki Haley back to wherever the hell she came from” by Election Day at a Democratic Party dinner; he delivered the remarks before Vice President Joe Biden spoke. He later said he was referring to “Lexington County,” where Haley grew up, though it’s hard not to see that as a racial remark given Haley’s Indian heritage.  Haley would go on to handily defeat Shaheen in her 2014 reelection bid.

Second, polls might not matter. Joe Biden is entering the final stages of public life after the Obama presidency. As many note, historically, the Vice Presidency is usually the end of the line in one’s political career; many don’t go higher than that office.  For his colleagues wondering about the secret to his electoral success, Biden says the same thing, “You have to figure out what’s worth losing over.”

Biden will be approaching his mid-70s by the time 2016 gets rolling. He’s has no other elections ahead of him to win; why not jump into the 2016 debate? If he somehow wins the nomination (highly unlikely), that’s great; but if he loses, he would probably enter retirement, maybe get on some lecture circuit, maybe serve on the board of some non-profit, or go the way of Sarah Palin and become a contributor to some news network and then start his own super PAC. He has spent 46 years in public life–I’m sure he will find some way to devote his time in a meaningful manner.

Moreover, the other candidates, like Sanders, Webb, and O’Malley, would probably welcome the inclusion of the vice president since they have a way to argue a position concerning the debates. You can’t flake out on the vice president, even if he’s garnering single digits in the polls. Thus, if Biden is on stage, so should the rest of them.

Yet, as of now, Biden doesn’t have a campaign infrastructure, or anything that resembles the foundation for a serious presidential campaign. That could all change in August. The man literally has nothing to lose; one last hurrah before his exit. Let’s see what happens.