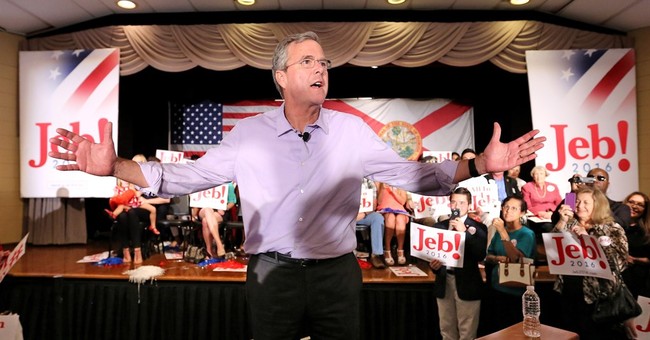 Last Friday, political action committees (PACs) had to file their mid-year reports, and Jeb Bush’s Right to Rise PAC is doing quite well. In all, the Wall Street Journal  reports that the super PACs backing 17 presidential candidates for 2016 raised more than $250 million, nearly doubling the $125 million raised by candidates for their respective campaigns. The publication also noted that out of the $250 million that went to the super PACs, at least 40 of the richest Americans in the country doled out $60 million for the PACs supporting the top-tier candidates. Oh, and Jeb Bush and his campaign apparatus garnered the lion's share of their donations:

The committee backing Jeb Bush was the most aggressive in adapting to the less regulated political environment. Half of the 40 billionaires identified by The Wall Street Journal donated a combined $17.4 million to Right to Rise USA while it was on the way to raising an unprecedented $103 million. That super PAC far surpassed its rivals in a crowded GOP field as well as Mrs. Clinton, the Democratic front-runner.

“Billionaires and millionaires have become the dominant players in financing the 2016 presidential campaigns,” said Fred Wertheimer, president of Democracy 21, a nonpartisan campaign finance watchdog group that has filed complaints against Mr. Bush with the FEC and the Justice Department. The complaints say Mr. Bush avoided campaign donation limits for candidates by starting a super PAC in January and delaying the official announcement of his campaign until mid-June. Right to Rise USA officials say they have complied with election law.

Wealthy benefactors helped close the gap in June when the Bush super PAC was more than $9 million shy of reaching the much-talked-about goal of $100 million before the end of the reporting period, setting off a last-minute scramble for cash. In the last two weeks of the month, Right to Rise saw an infusion of $12.7 million.

The group’s fundraising report showed 23 individuals and companies wrote checks of $1 million or more; another two dozen gave between $500,000 and $1 million.

The Bush campaign also revised the definition of a small donor, reporting 3,300 checks of $25,000 or less. Most campaigns identify a small donor as giving less than $200.

The super PAC had asked donors not to give more than $1 million but abandoned that cap on the day Mr. Bush formally entered the primary and could no longer solicit unlimited contributions.

At the same time, Hillary Clinton's PACs received some big cash from the one percent as well, including George Soros (of course):

Priorities USA Action, the primary super PAC backing Democratic frontrunner Hillary Clinton, raised $15.6 million in the first half of the year from 33 donors, a filing with the Federal Election Commission on Friday showed.

The super PAC, run by political strategist Guy Cecil, received eight checks for $1 million, all of which came in during the final week of June; the last day for super PACs to report donations was June 30. Mr. Cecil noted earlier this month that $12.5 million of the super PAC’s haul came in the month of June, following a shakeup that included replacing Buffy Wicks, a veteran field organizer for President Barack Obama, with Mr. Cecil, a who worked for Mrs. Clinton’s 2008 campaign and is seen by donors as closer to the Clinton campaign.

Among the top donors to the super PAC were billionaires financier Donald Sussman, global investor George Soros and media magnate Haim Saban. Mr. Soros gave $1 million to Priorities and another $1 million to American Bridge 21st Century, a second super PAC backing Mrs. Clinton. That super PAC has not yet filed its disclosure with the FEC, but said earlier this month it had raised $7.7 million. That brings the total super PAC haul for Mrs. Clinton to $24 million.

The PACs for New Jersey Gov. Chris Christie, Mike Huckabee, and Wisconsin Gov. Scott Walker also got some help from the one percent.

Obviously, there will be some people who will be unnerved by this influx of money into politics since Citizens United. Yet, we should all be reminded that a) the rich have First Amendment rights too (as do corporations) b) Americans spend more on yogurt than they do trying to invest in politicians that they entrust with keeping their best interests protected in Washington (or so they say on the campaign trail).

Before the 2010 elections, George Will wrote:

So, let’s not get crazy about campaign finance just yet. This was as expected, especially with Bush’s campaign haul. The war chests are filling up, some more than others. Yet, at the end of the day, the debate that we should be having is not the wealthy buying elections, but whether a confederation of super PACs or a national party’s committee is more efficient at winning elections. Which is king: soft or hard money?

Surely, the seasoned campaign operatives know the answer to this question.

The Clinton Foundation saw a significant increase in donations this year from fundraisers who also have volunteered to steer at least $100,000 each to Hillary Clinton’s presidential campaign, a review of a list of the donors made public Thursday shows.

At least 14 of the fundraisers, called Hillblazers, donated to the foundation in the first half of 2015 and have cumulatively given between $22 million and $55 million since the organization started in 1999, according to a comparison of the foundation and campaign disclosures. At the end of 2014, those 14 fundraisers had given between $16 million and $38 million. Eight of these donors stepped up their foundation donations enough to be pushed into a higher bracket in the first six months.

The uptick came as the Clintons sought to fund a $250 million endowment for the foundation before she entered the Democratic primary. If she wins the presidency, Mrs. Clinton and potentially her husband would have to suspend fundraising while she is in office. Mrs. Clinton already has quit doing so during the campaign.