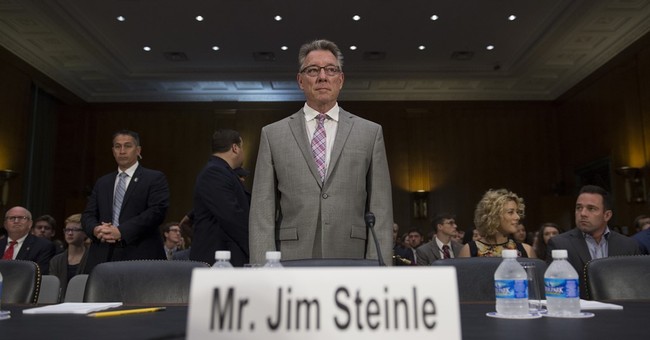 In light of the tragic death of Kate Steinle, who was killed by an illegal immigrant in San Francisco, Congress is debating legislation to deal with so-called sanctuary cities. The thought was that these local ordinances would allow illegal immigrants to report crimes without fear of deportation. Well, this skirting of federal immigration law has reaped some awful results. Yesterday, the House passed legislation that would withhold funds to cities that have passed sanctuary ordinances (via the Hill):

The bill, passed 241-179, would withhold certain federal law enforcement grants to cities that have policies designed to shelter illegal immigrants from deportation.

Critics of the sanctuary laws say such policies encourage people to immigrate to the U.S. illegally at the expense of citizens.

Democrats accused House Republicans of bringing up the bill in part because of real estate mogul and Republican presidential candidate Donald Trump’s focus on illegal immigration and sanctuary cities; they dubbed the bill the “Donald Trump Act.”

“Just a few weeks into his campaign and Donald Trump has a bill on the floor of the House. That is better than some of the senators he’s running against.” Rep. Luis Gutiérrez (D-Ill.) said mockingly.

Republicans denied that Trump had any influence on their decision to bring up the legislation.

“This is a valid concern that we’re voting on today,” said Rep. Tom MacArthur (R-N.J.), who has often broken with his party on immigration in the past and said he finds Trump’s comments offensive. “I’m not going to let Donald Trump dictate my vote.”

Five Republicans joined all but six Democrats in opposing the measure.

The sanctuary city debate centers on laws that are aimed at encouraging illegal immigrants to report crimes to the police without fear of deportation.

On Tuesday, Dan wrote about Jim Steinle’s testimony to Congress, which revolved around immigration enforcement. Steinle was walking on a pier with her dad when Francisco Sanchez shot her. The last words to her father were “help me, dad.” Besides Mr. Steinle, there were more gut-wrenching testimonials from families who had loved ones taken from them by illegal aliens:

Mrs. Oliver Sullivan spoke about how her husband, Deputy Sheriff Danny Oliver, was shot in the head — and killed — by an undocumented alien while on duty in Sacramento, California. She explained that a day doesn’t go by that she doesn’t think about him, and how his death was in all likelihood preventable. Mr. Brian McCann, meanwhile, testified that the convicted felon who murdered his brother, Dennis, was able to post bail and actually leave prison because of a failure in immigration policy. How could such a “pathetic, miscarriage of justice” be possible in the United States, he asked the panel of US senators?

Finally, and equally as heartbreaking, Ms. Laura Wilkinson recounted the unspeakable tragedy of when her son, Joshua, was tortured, killed, and left in a field to rot by a so-called DREAMer. She therefore called on members of Congress to start implementing immigrations laws that put Americans — not criminals — first. (Her son’s killer was sentenced to life in prison. But, as Ms. Wilkinson testified, she expects he will one day be granted parole and won’t be deported).

The Iowa Republican’s legislation would force local government officials to cooperate with federal immigration authorities or lose grants from the Department of Homeland Security and the Justice Department. The legislation, Grassley said, would hold sanctuary cities “accountable.”

The bill also calls for a mandatory minimum sentence of five years in prison for immigrants who try to enter the United States after being deported. The suspect in Steinle’s death — Juan Francisco Lopez-Sanchez — had been deported to his native Mexico multiple times but had re-entered the country.

“Enforcing the immigration laws of the United States is not a voluntary or trivial matter,” Grassley said as he opened the hearing. “Real lives are at stake. Things cannot continue this way.”

It’s a sad fact that Ms. Steinle’s tragic death had to serve as a catalyst for something that should already be happening in this country: the enforcement of federal immigration laws. This aura of lawlessness­–or lack of respect for the rule of law–is what’s driving Trumpmentum, and it goes beyond immigration. It has touched upon health care with the Obama administration, where the administration decided to delay the imposition of the employer mandate, despite an explicit date written into the law by Congress.

After eight years of Obama tweaking immigration and health care unilaterally, it’s easy to see why people are so angry. At the same time, Donald Trump isn’t going to save the nation, he won’t be the 2016 Republican nominee, and he certainly won’t be elected President of the United States next year.

Yet, it’s up to the other candidates in the field to try and channel this energy, but also trying to avoid making the mistake Mitt Romney did in 2012, where the 2012 nominee said that he supported self-deportation in the primaries.

Joe Bye-Done: WaPo's Article About Biden's Struggles Sure Does Drive a Dagger Into His Presidency
Townhall
Atlantic writer blames conservatives for *literally* bringing the US 'ritual human sacrifice on a mass scale'
Twitchy
Nancy Pelosi Makes a Panic Move and Sets up a Showdown With Her Own Party
Redstate
Meet 'Dr. Tarece' — and Pray for the Families in Georgia's Largest School District
PJ Media