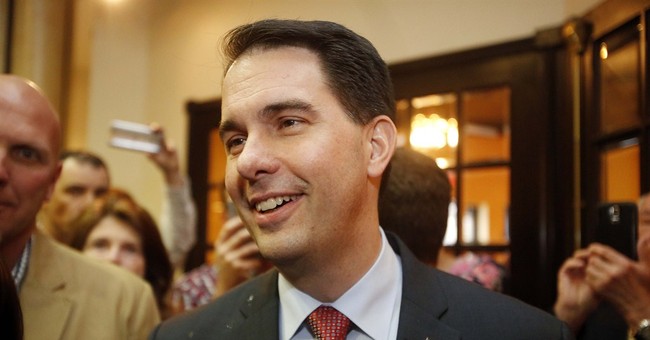 As many Republicans are waiting for Walker as the 2016 race heats up, let’s look at his standing with the top GOP donors. In short, he has good relations with them, and it shows he’s a serious candidate. The New York Times’ Upshot blog categorized the top 250 GOP donors based on individuals who have given the maximum amount allowed by law at the federal level over the past 12 years. It’s a bit skewed given that former Florida Gov. Jeb Bush’s last election was in 2002, and has remained out of the political limelight until recently. As a result, his numbers aren’t that good. Nevertheless, everyone recognizes that he will be a leviathan in fundraising if he decides to run, which by all accounts, looks like he will in the foreseeable future.

In all, out of the 250 donors who meet the Times criteria, Gov. Walker nabbed 48 percent, followed by Sen. Marco Rubio (R-FL) with 30 percent, and Sen. Ted Cruz (R-TX) with 20 percent. Unsurprisingly, the article noted Mr. Walker’s strong points; being elected from a mostly blue state, surviving a relentless political offensive from the left, and pushing through a conservative agenda. It also mentioned Sen. Cruz’s meteoric rise with donors, noting that his strong showing suggests donors are enthusiastic about the conservative firebrand, and that the GOP’s wealthy donor base goes beyond Mitt Romney. Yet, a better look at their fundraising operations will be known on July 15:

Beyond money, the support from donors is a sign to other party leaders that he is a serious candidate. Political science research has found that early support among elected officials, donors and other party figures has a substantial influence on presidential nominating contests.

[I]n Texas, Mr. Walker seems popular among large donors. He has received money from 21 Texas donors in the top 250, while Mr. Cruz has received contributions from 15. (Rick Perry, the former Texas governor, got money from 11 of them during his 2012 presidential bid.)

There is another possible benefit of ties to wealthy donors: It might help to dissuade them from spending money independently against a candidate during the primary. Many of the donors have their own political advisers or networks of fellow donors that could be used to inject millions in independent spending into the presidential race. A previous donation is no guarantee of current support, but it’s also something that candidates would be likely to remind donors of even if they can’t secure additional contributions. Very few of these donors have given to just one of the potential presidential hopefuls — at least 23 have given to Mr. Walker, Mr. Rubio and Mr. Cruz, for example — so they will be hearing multiple pitches.

Candidates hoping to deny Mr. Walker support from these donors could point to the differences between running a statewide campaign and a national one, or try to explain his 2012 recall election — when he expanded his donor network — as an extraordinary circumstance.

It’s important to keep in mind that most of the candidates have been raising money or securing pledges for months, and come July 15, when we’ll get a look at their fund-raising efforts, this picture will look different because a number of the major donors will have given money. It’s also worth mentioning that although the top 250 donors have given large amounts of campaign cash, presidential candidates will need to raise money from tens of thousands of individuals in amounts large and small.

Walker has been working on building his national donor network for quite some time, and while it may not raise as much money as Bush; it could be one of the largest networks in the party. In the past four years, he’s been able to raise $83 million for his past three elections from a state that isn’t necessarily considered a powerhouse in politics. Moreover, Walker’s small donor Rolodex is said to rival that of Sen. Rand Paul (R-KY).

There’s also the $300 million the Koch brothers are projected to spend on campaigns in 2016–and that amount could be spread amongst several candidates. We have a solid field in 2016, with serious candidates who look attractive to donors. That’s a good thing. Every wing of the GOP is more or less represented for the upcoming primaries; let’s see how they do.