Clinton Foundation On Tax Returns: ‘Yes, We Made Mistakes’ 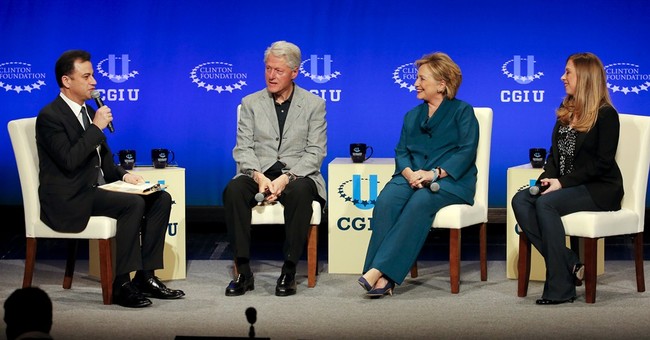 Today, Maura Pally, the acting CEO of the Clinton Foundation, released this blog post addressing some of the concerns raised by the media regarding the foundations donors, donations, and tax returns. Of course, the gist of the post revolved around the good work the foundation is doing worldwide; how they’ve gone “above and beyond” what normal non-profits do regarding transparency; and noted how “donor disclosure and foreign government contributor policy is stronger than ever.” As for Clinton Giustra Enterprise Partnership, which is based in Canada, those individual donors aren’t listed since Canadian law prohibits such disclosure without express permission from each donor (via Clinton Foundation):

I also want to address questions regarding our 990 tax forms. We have said that after a voluntary external review is completed we will likely refile forms for some years. While some have suggested that this indicates a failure to accurately report our total revenue, that is not the case. Our total revenue was accurately reported on each year's form – our error was that government grants were mistakenly combined with other donations. Those same grants have always been properly listed and broken out and available for anyone to see on our audited financial statements, posted on our website.

So yes, we made mistakes, as many organizations of our size do, but we are acting quickly to remedy them, and have taken steps to ensure they don't happen in the future. We are committed to operating the Foundation responsibly and effectively to continue the life-changing work that this philanthropy is doing every day. I encourage you to read more about that good work at www.clintonfoundation.org.

To recap, The New York Times  reported on a controversial energy deal regarding a Russian state-owned corporation taking over a Canadian mining company­–Uranium One–which was responsible for 20 percent of uranium production in the United States. The deal had to be approved by the Committee On Foreign Investment since uranium is part of America’s national security interest; the State Department was one of the principal actors on the committee. The deal was approved, but not after interests with ties to the deal poured cash into the Clinton Foundation. During this period, Mr. Clinton received a $500,000 speaking fee from a Russian bank involved in the deal. Also, the donors who made these contributions were not disclosed, despite an agreement with the Obama White House to do so.

This image courtesy of The New York Times.

As for the Clinton Foundation’s tax returns, they were a bit off (via Reuters):

For three years in a row beginning in 2010, the Clinton Foundation reported to the IRS that it received zero in funds from foreign and U.S. governments, a dramatic fall-off from the tens of millions of dollars in foreign government contributions reported in preceding years. Those entries were errors, according to the foundation: several foreign governments continued to give tens of millions of dollars toward the foundation's work on climate change and economic development through this three-year period.

With Clinton’s approval numbers falling­, and her rather poor numbers regarding trustworthiness, Pally’s letter “jumps on the grenade,” as the Washington Post’s Philip Bump wrote–and tries to divert some of the attention away from the Clintons by saying the tax return foul-up was on the foundation:

First, she needed to respond in order to clear any clouds hanging over the foundation itself. And, second, better that the foundation own the mistakes than that they be Hillary Clinton's.

This week, Quinnipiac University released poll numbers showing that more than half of Americans don't consider Clinton to be trustworthy. There's a big partisan split, as you'd expect, but more than 60 percent of independent voters held that view. So too did more than half of women.

Pelly's letter hopes to dissipate some of the smoke that implies there's a metaphorical fire burning under these stories. Voters probably aren't paying much attention now, and we'll have to wait to see if other stories emerge or if these ones -- neither of which proves any improper activity on Clinton's part -- have traction. The candidate's problem is that it reinforces a perception problem that the Quinnipiac polling makes clear.

She'd probably welcome a shift that resulted in people thinking that only the foundation had made big mistakes.

We shall see if this puts out any fires, but there will probably be more stories regarding Hillary, Bill, and the Clinton Foundation that will raise the same ethical questions. We shouldn’t be shocked if more comes down the pipeline on this matter.