The 'Meticulously' Documented Look Inside The Clinton Foundation–Yes, Team Hillary Should Be Worried 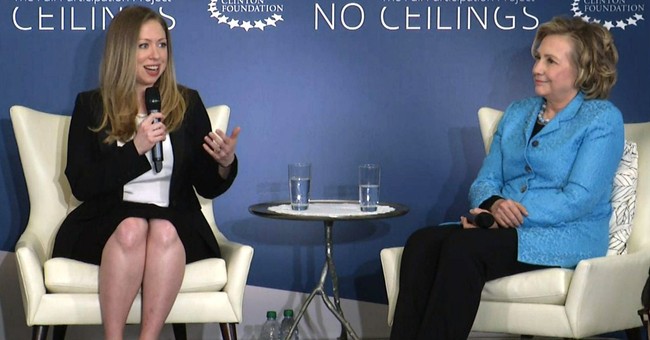 UPDATE: Oh geez: One of the Clinton Foundation’s biggest donors–Ukrainian Victor Pinchuk–possibly violated US sanctions policy on Iran by trading with them.

It’s not a long book, but it’s one that should shed some sunlight into the Clinton Foundation–and its donations from foreign governments. The book by Peter Schweizer, Clinton Cash: The Untold Story of How and Why Foreign Governments and Businesses Helped Make Bill and Hillary Rich, is a 256-page long investigation into these dealings, according to The New York Times. The release date is May 5 [emphasis mine]:

The book, a copy of which was obtained by The New York Times, asserts that foreign entities who made payments to the Clinton Foundation and to Mr. Clinton through high speaking fees received favors from Mrs. Clinton’s State Department in return.

“We will see a pattern of financial transactions involving the Clintons that occurred contemporaneous with favorable U.S. policy decisions benefiting those providing the funds,” Mr. Schweizer writes.

His examples include a free-trade agreement in Colombia that benefited a major foundation donor’s natural resource investments in the South American nation, development projects in the aftermath of the Haitian earthquake in 2010, and more than $1 million in payments to Mr. Clinton by a Canadian bank and major shareholder in the Keystone XL oil pipeline around the time the project was being debated in the State Departmen

…“Clinton Cash” is potentially more unsettling, both because of its focused reporting and because major news organizations including The Times, The Washington Post and Fox News have exclusive agreements with the author to pursue the story lines found in the book.

Knowing this will supply conservatives with more ammunition to use against Hillary, her team is preparing their defenses:

A [Clinton] campaign spokesman, Brian Fallon, called the book part of the Republicans’ coordinated attack strategy on Mrs. Clinton “twisting previously known facts into absurd conspiracy theories,” and he said “it will not be the first work of partisan-fueled fiction about the Clintons’ record, and we know it will not be the last.”

Mr. Schweizer and a spokeswoman for HarperCollins, which is owned by News Corporation and is publishing the book, declined to comment.

The timing is problematic for Mrs. Clinton as she begins a campaign to position herself as a “champion for everyday Americans.”

From 2001 to 2012, the Clintons’ income was at least $136.5 million, Mr. Schweizer writes, using a figure previously reported in The Post. “During Hillary’s years of public service, the Clintons have conducted or facilitated hundreds of large transactions” with foreign governments and individuals, he writes. “Some of these transactions have put millions in their own pockets.”

The Clinton Foundation has come under scrutiny for accepting foreign donations while Mrs. Clinton served as secretary of state. Last week, the foundation revised its policy to allow donations from countries like Germany, Canada, the Netherlands and Britain but prohibit giving by other nations in the Middle East.

Mr. Schweizer’s book will be released the same day former President Bill Clinton and the Clintons’ daughter, Chelsea, will host the Clinton Global Initiative gathering with donors in Morocco, the culmination of a foundation trip to several African nations. (A chapter in the book is titled “Warlord Economics: The Clintons Do Africa.”)

Now, while the Clinton Foundation has restricted donations from foreign governments to mainly our close allies, National Journal’s Ron Fournier noted, “You can’t be a little bit pregnant.” While Clinton resigned from the Clinton Foundation’s board, it’s still obviously an ethics issue, given that friendly governments are still able to give money to a family-owned non-profit with ties to someone who could potentially be the next President of the United States.

The Boston Globe’s Shira Center also said of all the attacks against Clinton, this is the one that has “legs.”

The foundation has been the subject of some controversy regarding revelations that it hasn’t disclosed its donors since 2010. In 2008, Hillary Clinton said the non-profit would disclose the names of their donors in an effort to be transparent–and to show she was not beholden to foreign interests. Additionally, President Clinton had an agreement with the Obama administration that the foundation would not accept donations from most foreign governments while Hillary served as Secretary of State, though it doesn't appear to have been extended to foreign individuals, some of which had ties to their own government–and they gave generously.  Also, foreign governments did give to the foundation while Hillary served as our top diplomat, with one donation from Algeria violating the ethics agreement with the Obama administration. Concerning the Clinton Health Access Initiative (CHAI), which spends most of the foundation's money, the arrangement that "any new or increased" donations from foreign governments would be subjected to a State Department review does not appear to have been honored, according to Reuters.  And her position on the U.S.-Colombian Free Trade Agreement appears to have switched after some checks were made out to the Foundation from Frank Guistra–a Canadian financier–who helped found the oil company Pacific Rubiales (who also gave money), which has interests in Colombia. Guistra now sits on the board of directors of the Clinton Foundation.

Last note: As Guy mentioned, the Times noted it’s a thorough investigative piece, with government documents and tax returns being “meticulously" cited; a point buried until virtually the second to last paragraph.

Dem machine to attack the reporter, then dismiss each thoroughly-researched revelation as "old news" https://t.co/AoVBNCQlha

Dems attacking the messenger, but even the NYT admits his reporting is solid and documented... http://t.co/zpZHysjyD8