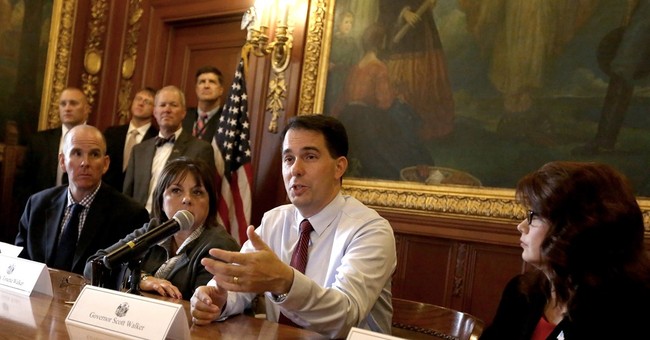 "Chad Airhart and Jarret Heil are respected government officials and party activists who've accomplished so much on behalf of their local communities in such a short amount of time," Walker said. "They've been elected to leadership positions by their peers because they're committed to delivering efficient, effective services at the most local level of representative government."

On Feb. 1, Heil, 34, also assumed responsibilities as Marshall County auditor and recorder after the board of supervisors appointed him to fill the positions on an acting basis. He is believed to be the first Iowa official to assume simultaneous responsibilities for all three positions.

Airhart, 37, serves one of the fastest-growing counties in the United States. During his first term, the Dallas County Recorder’s Office returned more than $1.15 million in the form of a surplus to the county general fund, alleviating the need for additional property tax dollars.

Airhart and Heil were both drawn to Our American Revival by Walker's leadership as Wisconsin's chief executive and his experience as a former Milwaukee County executive.

"I support Governor Walker and Our American Revival because he is a leader that has taken on serious challenges, and by applying common sense conservative principles, has moved his state in the right direction. Those same principles are the backbone of the Our American Revival mission," Airhart said. "Being a former Wisconsin legislator, county executive, and now governor that has been elected three times in four years, he is arguably the most accomplished sitting governor in America and I am now proud to help him promote policies that restore power to the states and their people.”

Heil added, "When Governor Walker was a county official, he voluntarily returned part of his salary and has a record of results when it comes to balancing budgets, meeting service needs and coming up with innovative solutions to tackle the toughest problems. That's putting your money where your mouth is and that's real leadership. It's also inspiring. We need to share that kind of leadership and vision across Iowa and across the country, and Our American Revival was formed to do just that. I'm very happy to be involved."

Iowa is seen as a make or break state for Walker. As John Fund wrote last January, many in the state are watching the possible 2016 candidate on right to work legislation, which recently passed the Wisconsin state Senate, and gambling; there’s an $800 million casino project based in Kenosha that might hurt him in the Hawkeye State if he signs on to it. Iowa Sen. Joni Ernst and 600 other Republicans sent a letter to Walker urging him to adopt a “No Expanding Gambling” policy.