Sen. Tammy Baldwin Lawyers Up After Three Deaths Are Linked To A VA Report She Sat On For Months 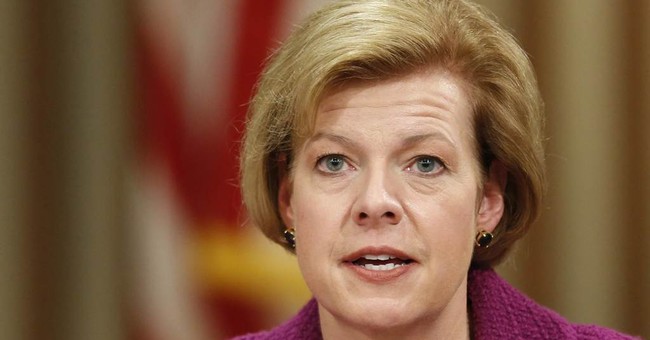 Sen. Tammy Baldwin (D-WI), the first openly gay member of the U.S. Senate, may have landed herself in some trouble after it was reported her office did little to address the rather high rate of opiate prescriptions coming out of the Veterans Affairs center in Tomah, Wisconsin. As a result, Baldwin's office fired a top aide, offered her a severance package, and a confidentiality agreement. The aide, Marquette Baylor, rejected the deal and is considering a sexual discrimination lawsuit against Baldwin.  At the same time, Baldwin's office had the Tomah VA report since last summer.

To make matters worse, three deaths are linked to the overmedication problem highlighted in the report on the facility. A congressional hearing is scheduled on the matter (via AP):

A congressional hearing prompted by three deaths and reports of overmedication at a Veterans Affairs medical center in Tomah will be held locally, officials said Thursday.

U.S. Sen. Tammy Baldwin, who said last month she accepts responsibility for not acting sooner, is now being advised by a Democratic political lawyer, and the Republican Party of Wisconsin has filed an ethics complaint against her related to how her office handled the matter.

Several members of Congress had asked for a hearing into allegations of overprescribed medication at the medical center as well as retaliatory practices against employees who spoke about it. The chairman of the U.S. House Committee on Veterans Affairs, Rep. Jeff Miller of Florida, said the hearing will be in Tomah. But the date and details have not yet been set.

The center, which came under scrutiny last month when former employees and the families of former patients alleged that doctors overprescribed narcotics, is already under investigation by the VA’s Office of the Inspector General and the Veterans Affairs Secretary of Health. The deaths of three patients — Thomas Baer, 74, of Marshfield, last month; Jason Simcakoski, 35, of Stevens Point in 2014; and Jacob Ward, 27, of Milwaukee in 2013 — prompted state representatives to call for a federal probe.

Also, political lawyer Marc Elias said in a statement Thursday that he will advise Baldwin after her former deputy state director accused Baldwin of wrongfully terminating her. Marquette Baylor was fired last month amid allegations that Baldwin’s office did not respond appropriately to the reports of overmedication.

Republicans have filed an ethics complaint against Baldwin with the Senate Ethics Committee, alleging a cover-up and misappropriation of funds to secure that end. Baldwin has solicited the help of Marc Elias, a prominent Democratic lawyer, to help her navigate through this legal maze (via Politico):

Wisconsin Republicans are determined to make a long-simmering local news story about Sen. Tammy Baldwin stick, filing an ethics complaint in hopes of leaving a black mark on the freshman Democrat’s first term.

The state GOP issued a complaint Thursday to the Senate Ethics Committee that alleges Baldwin offered a former employee a severance package not to talk about her office’s bungled response to opioid problems at a Veterans Affairs facility in Tomah, Wisconsin, which state investigators have linked to at least one death.

Tammy Baldwin wrongly appropriated taxpayer funds to compensate a Senate employee who would not have performed official government duties while also fraudulently offering a contract to silence a former employee in order to save Baldwin’s career,” Joe Fadness, the executive director of the state Republican Party, wrote in the complaint.

Baldwin has retained Marc Elias, a major power player in Democratic politics, as counsel to deal with the fallout over Baylor’s termination and the Tomah VA facility. Elias said in an emailed statement that GOP’s complaint is “nothing more than a political stunt.”

“This is a frivolous allegation wholly without merit,” Elias said. “It is unfortunate that the Republican Party has made the choice to play partisan politics with the serious and tragic issues facing the VA and our veterans.”

Yet, the most damning part about this whole event is that her office had this VA report on the medication problem for months, according to USA Today [emphasis mine]:

Sen. Tammy Baldwin's office received an inspection report last summer detailing high amounts of opiates prescribed at the Veterans Affairs Medical Center in Tomah, but there is no indication her office took action on the findings until last week, when she called for an investigation after a news report revealed a veteran died from an overdose at the facility.

The report by the VA inspector general, a copy of which was obtained by USA TODAY, noted that two practitioners at the center were among the highest prescribers of opiates in a multistate region — at "considerable variance" compared with most opioid prescribers. That, the report said, raised "potentially serious concerns."

A whistleblower who learned in November that Baldwin had had a copy for months and hadn't acted, repeatedly emailed her office asking that she do something to help the veterans at the center, according to copies of the emails obtained by USA TODAY.

Watchdog Wisconsin’s M.D. Kittle reported that Baldwin has responded “aggressively" to the allegations lobbed at the Tomah VA center, but it’s something that should have been done months prior. In an interview with Cheri Cannon, an Arlington-based lawyer and partner at Tully Rinckey PLLC, she noted that Baldwin was in “damage control” mode.