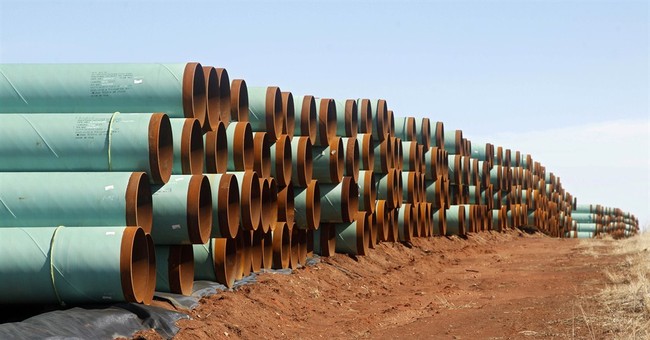 Recently, Americans for Prosperity launched a massive campaign to urge President Obama not to veto the Keystone XL Pipeline project. They’ve mobilized 2.3 million of their grassroots activists to call the White House switchboard.

Americans for Prosperity, the nation’s largest grassroots advocate for economic freedom, is launching a major effort directed at President Obama urging him to approve the Keystone XL Pipeline. The effort includes directing their over 2.3 million activists to call the White House switchboard and ask the President not to veto the bill.

“The Keystone pipeline has been approved by the House, the Senate, and has passed environmental review. The project would create much needed jobs right away. Vetoing this legislation would mean putting special interests and ideology above American workers. We ask President Obama to do the right thing and approve the Keystone plan,” said AFP President Tim Phillips.

AFP said their efforts will include directing hundreds of calls into the White House switchboard, organizing online activism, and digital advertising.

Passage of the Keystone XL Pipeline is part of a list of top policy priorities unveiled last month when AFP launched Reform America 2015. The agenda includes a set of goals that the organization will advance in the coming months, including achievable reforms to health care, energy, and the federal budget. AFP, which has chapters in 34 states, has said it will engage its robust network of activists to push for policy reforms outlined in the Reform America 2015 plan.

So far, at least a couple thousand have already been patched through. In January of 2014, the Keystone Pipeline project was given a clean bill of health by the State Department, who reported that the project had “no major environmental concerns," though it wasn't viewed as a decision document (via AP):

The long-delayed Keystone XL oil pipeline cleared a major hurdle toward approval Friday, a serious blow to environmentalists' hopes that President Barack Obama will block the controversial project running more than 1,000 miles from Canada through the heart of the U.S.

The State Department reported no major environmental objections to the proposed $7 billion pipeline, which has become a symbol of the political debate over climate change. Republicans and some oil- and gas-producing states in the U.S. — as well as Canada's minister of natural resources — cheered the report, but it further rankled environmentalists already at odds with Obama and his energy policy.

The report stops short of recommending approval of the pipeline, but the review gives Obama new support if he chooses to endorse it in spite of opposition from many Democrats and environmental groups. Foes say the pipeline would carry "dirty oil" that contributes to global warming, and they also express concern about possible spills.

The 1,179-mile pipeline would travel through the heart of the United States, carrying oil derived from tar sands in western Canada to a hub in Nebraska, where it would connect with existing pipelines to carry more than 800,000 barrels of crude oil a day to refineries on the Texas Gulf Coast. It would cross Montana and South Dakota before reaching Nebraska. An existing spur runs through Kansas and Oklahoma to Texas.

Access to energy is becoming a more salient issue by the day. In Washington State, two bills have been put forward that would eliminate coal power. Environmentalist groups are complaining that the bills give too long a timetable for coal plants to close their doors (via NYT):

Lawmakers hoping to wean Washington State off coal power are trying to ease the way for the state’s utilities to end the electricity they get from coal.

Bills in the House and Senate would set favorable conditions for three private utilities if they decided to shut down a large coal-fired power plant in eastern Montana that provides power to a chunk of the Pacific Northwest.

Supporters say the proposal gives the utilities the tools to begin divesting from coal power plants, including a way to issue bonds for a shutdown.

But the Sierra Club and other critics say the proposal removes too much utility oversight, sets too long a timeline for closing a power plant and does not ensure that coal power would be replaced by something cleaner.

POLITICO Joins in on Covering Democrats' Frustration With Joe Biden
Rebecca Downs
Wash. School Board Director Wants to Expose 'Sexual Pleasure’ to 9-Year-Olds
Sarah Arnold
Biden's Communications Director Is Calling It Quits
Spencer Brown
Joy Reid's Guest Who Mocked Americans for Being 'Slaves' to Constitution is a Law Professor Who Should Know Better
Rebecca Downs
A Sign for 2024? President Trump's Plane is Back.
Katie Pavlich
The Left Wants to Pack the Supreme Court. Law Professor Shares His Plan to Reshape It.
Matt Vespa
CARTOONS | AF Branco
View Cartoon
Most Popular