Jeb Bush’s Massive Fundraising Operation Has Been Set In Motion 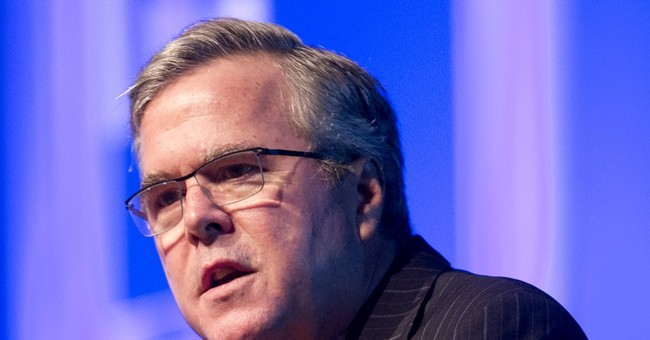 Today, former Florida Governor Jeb Bush launched “Right The Rise” PAC, which supports “candidates who believe in conservative principles to allow all Americans to rise up.” The site, which is also available in Spanish, touts a strong defense, education reform, entrepreneurship, small businesses, and rising wages. Given that Republicans won the middle class vote– and either won or was competitive with voters making less than $100,000 a year–Jeb seems to be channeling the neo-populist wave which seems to be growing more by the day as we approach the 2016 election.

At the Right to Rise PAC, we will support candidates who want to restore the promise of America with a positive, conservative vision of reform and renewal. We believe the income gap is real, but that only conservative principles can solve it by removing the barriers to upward mobility. We will celebrate success and risk-taking, protect liberty, cherish free enterprise, strengthen our national defense, embrace the energy revolution, fix our broken and obsolete immigration system, and give all children a better future by transforming our education system through choice, high standards and accountability. We will strive to put our fiscal house back in order, re-limit government and ensure that America is a welcoming society.

This seems to be the first part of the massive fundraising operation Bush seeks to deploy to finance his potential 2016 presidential bid (via Politico):

Allies of the former Florida governor are planning to roll out both a leadership PAC and a super PAC in the coming days in an effort to lock up major donors and give pause to potential rivals for the 2016 GOP presidential nomination, according to several sources.

They say the two PACs are planning their finance teams, as well as first quarter fundraising events, including some in Florida and one in Washington before the end of the month.

The plan is a bold one that in some ways echoes — and updates — the aggressive pre-campaign fundraising approach taken by Mitt Romney ahead of his 2008 and 2012 runs.

A leadership PAC could be used to pay the growing political team that works directly with Bush. It could also fund his travels around the country talking to activists and voters, as well as donations to like-minded politicians in key early states who might provide valuable endorsements during the presidential race.

A super PAC, on the other hand, can accept donations of unlimited size, provided the cash is not spent in coordination with any federal candidate or officeholder — meaning Cruz, Paul, Rubio and their aides couldn’t control such an entity. But, since Bush is neither a federal officeholder nor an officially declared candidate, he or his aides likely could be involved with a super PAC before he entered the race. In the meantime, the super PAC could air ads or send mailings touting his attributes or questioning those of his prospective rivals in general terms.

Once he enters the race, Bush could return again to the same donors who wrote checks to the leadership PAC and the super PAC to ask for cash for his official presidential campaign committee. But he and his campaign would have to erect a firewall between itself and the super PAC, which could then use the cash it raised to support his presidential campaign or attack his primary opponents — provided it’s done without input from the campaign.

We shall see what happens.