MI GOV: Mark Schauer Just Could Not Get The Votes 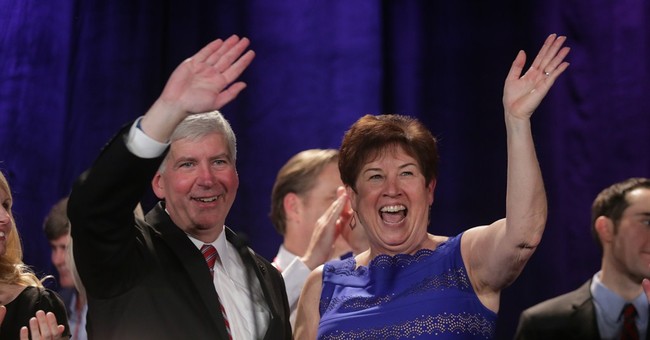 While Michigan gubernatorial candidate Mark Schauer traveled to every part of the state ahead of Election Day last week, the Democratic base simply did not show up for him. Incumbent Republican Gov. Rick Snyder beat Schauer 51/47.

While turnout was projected to be higher than expected, it actually dropped 2.5 percent from 2010. With these numbers, Schauer’s only saving grace was to reach out to independent voters, who liked Snyder–and who enjoyed greater party base support this time around. Also, while Michigan U.S. Senate candidate Rep. Gary Peters was able to show a very human side to his campaign, which was a stark difference compared to that of his Republican rival, Terri Lynn Land; there wasn’t much of that with Schauer according to political analysts (via AP):

Three in 10 Michigan voters identified themselves as independents or members of other parties and, of those, Snyder prevailed by an almost 2-to-1 margin, according to the results of an exit poll conducted for The Associated Press and television networks.

Of the four in 10 who called themselves Democrats, 89 percent went for Schauer and 10 percent with Snyder. Three in 10 said they were Republicans — 94 percent voted for the governor, 6 percent for Schauer.

Ed Sarpolus, a political analyst and pollster, said voters also connected with Peters. He ran a TV ad, “Frugal,” in which his wife and daughters poked fun at their old washing machine and his frayed sweatshirt and ragged shoes. Other ads focused on his military service and Michigan roots.

“How much did you learn about Mark Schauer the man and his family? Nothing. ... There was no humanization of Mark Schauer. It was always attacks,” said Sarpolus, who conducted his own exit polling that found Schauer was largely an unknown quantity compared with the governor.

He said Schauer’s decision to flog Snyder on two major issues — taxing retirement income and cutting education funding — was an effort to persuade 2010 Snyder supporters to switch their vote.

“But he didn’t have issues to drive Democrats,” Sarpolus said, contending that while Peters had a broader agenda for moderates and women, the governor’s election ultimately determines overall voter numbers.

According to the exits, Snyder won:

As for the middle class vote, both sides can split it to compliment their narrative. Snyder won Michigan voters $50k-100k, but if you add all Michigan residents making less than $100k (Schauer dominated the under $50k demographic); Schauer beats Snyder slightly by a 51/48 margin. Still, it undercuts the Democratic Party mantra that they’re the party of the middle class– and Schauer’s attacks on Snyder, where he alleged that the governor was presiding over an economic recovery that only benefited the wealthy in Michigan.

Michigan voters who thought the economy was the most important issue facing the country–47 percent of them did–they broke for Snyder 51/48, while those who said they were “very worried” about their economic conditions overwhelmingly voted for Snyder 64/32. If you add the worried and not worried crosstabs together, 76 percent were worried about the state of the economy, while 24 percent were not; unsurprisingly the worried bloc broke for Snyder 55/42.

Lastly while there was a gender gap–Schauer won women 53/45–Snyder kept that deficit within single digits, keeping him competitive with that very powerful, but movable, bloc of voters.

Labor unions also invested heavily to beat the pro-right-to-work Snyder, but to no avail. Unions also tried to knock off Gov. Scott Walker in the neighboring Wisconsin; Walker won. It could be time for Michigan Democrats to find new allies in order to win elections–and recognize that labor unions’ political muscle has atrophied.

As Snyder enters a new term, the State Senate just passed a bill to improve Michigan’s infrastructure by enacting more gas taxes. Snyder said he’s open to having a gas tax pass, but also offering a sales tax hike so that voters can decide. Infrastructure was an issue that both Schauer and Snyder said needs attention.