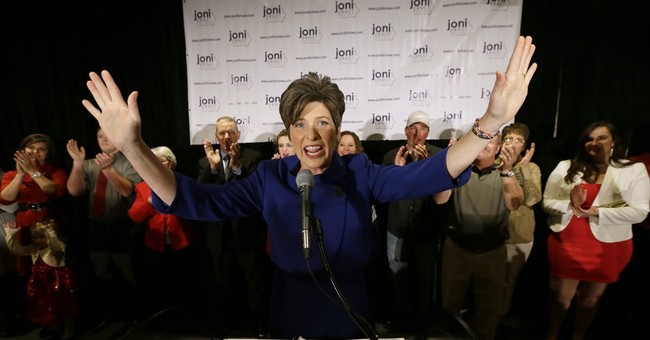 Whether liberals would like to admit it or not; 2014 was a historic moment for women, especially Republican women. Besides it being a wave election, Republicans elected the first female senators from Iowa and West Virginia, the youngest woman ever elected to Congress, and the first black Republican woman–Mia Love–in Utah.

Yet, these were Republican women; they’re a horrid subset of the human species beholden to their patriarchal masters according to feminists. Well, it all comes down to abortion–again–and this super-secret conspiracy to make life for American women–and women around the world–miserable (via the Guardian) [emphasis mine]:

In a way, female Republicans almost bother me more than their male counterparts. I can almost understand why a bunch of rich, religiously conservative white men wouldn’t care about the reality of women’s day-to-day lives – they’ve never had to. But throwing other women under the bus? For what? Lower taxes? Three minutes on Fox News in the 3pm hour? It makes me wonder what is wrong with you.

Politics is personal. It’s not about a platform to which no one hews, or about some words on a teleprompter, or even some indecipherable language in a bill. My horror at Tuesday night’s election results springs from knowing the personal and economic degradation to which the Republican party is willing to subject American women – and women throughout the world – and that other women are helping them to do it.

This may have been an election of firsts for Republicans – and women – but it’s not a “win” for women. Equal representation is important, but it doesn’t equal justice.

Regardless of your gender, if you align yourself with a party that has historically and consistently targeted women’s rights, health and lives – let alone a party that pats women on the head as it strips away those rights from us – you should understand why women aren’t applauding in solidarity with you this week. And maybe you should be at least a little ashamed.

Valenti’s column was certainly popcorn worthy, as were other liberal commentaries lamenting of the abject slaughter their party suffered last Tuesday, but shouldn’t the fact that Republicans–and women–were able to make history before Democrats a sign of a narrative that’s becoming increasingly stale? Is the “War on Women” dead?

Emily Zanotti at the American Spectator  wrote, “the war on women is over, and we [Republicans] won:”

It didn’t help that the War on Women morphed into an improv comedy sketch. In Colorado, where Democrat Mark Udall lost his Senate seat to Republican Cory Gardner, the campaign ended with a radio ad suggesting that the GOP would ban birth control, which would cause a statewide shortage of condoms, which would force the state’s nameless girlfriends to rely on their boyfriends for condescending political advice. Cosmopolitan magazine, which has made giving questionable information to its readership an editorial policy, launched a campaign aimed at educating low-information single female voters, starting with a complaint about terming young women "Beyoncé voters" paired with a kickoff graphic of Beyoncé, and ending with a party bus full of male models carting college students to the polls.

What happened? Mark Udall ended up looking like a creeper, more concerned with his constituents sex lives than with their concerns.

The left put the feminists in their vanguard, and the whole mess went off a cliff. Women got the message that all the Democrats think about is their vaginas (when they think about women at all).

On the other hand, liberal women, Valenti and co.’s people, got killed. Katie compiled the butcher’s bill  last week.

Yet, not all feminists took the Valenti route and scoffed at the historic gains made by Republican women. Some know that women voters have disagreements, they have different opinions, and don't all fall within the hard left’s feminist paradigm on issues that make them acceptable human beings.

Jessica Grose over at Slate  wrote about how women voters, even liberal ones, were glad to see Democrats, like Sen. Mark Udall, lose because they were all too focused on abortion. Oh, and there was a slight dig at her colleagues over reading exit polls properly [emphasis mine]:

A headline on the Cut announces that the midterm election results were “Bad News for Women.” Under it, Ann Friedman argues that even though there were several “prominent victories” for Republican women this week—including combat veteran and hog castrator Joni Ernst in Iowa, black Mormon Mia Love in Utah, and youngest woman to ever be elected to Congress Elise Stefanik in New York—because they do not support abortion rights and are pro-gun, that means their wins are not a boon for women.

I’m not sure I agree. If you are against everything Joni Ernst or Mia Love stand for, then this election was bad for you, and the policies you care about, not bad for women. It should be obvious, but “women”—half the population—are not a uniform voting block with uniform ideas about what is best for them. Though Friedman claims that Ernst was “a woman candidate whom most women voted against,” NBC’s Iowa exit poll shows that’s just not the case: Ernst and her opponent Bruce Braley split the female vote evenly, 49 to 49 percent. Though I personally find Ernst’s far right views terrifying (she believes in fetal personhood and wants to abolish the EPA and the Department of Education), “women” in Iowa do not agree with me, and she’s their representative, not mine.

[T]hough the right to choose is incredibly important to people like me and Ann Friedman, it’s not as important to a good portion of the female electorate. And even women who do care deeply about reproductive rights don’t necessarily like being treated as one-issue voters. Two anecdotal examples: After the election, a woman I think of as a deeply feminist Colorado resident—she has devoted her life to fighting sexual assault—posted on Facebook that she was glad to see Democratic Sen. Mark Udall lose his race. “The ads angered me,” she wrote of Udall’s TV commercials like “Backwards,” which focused on women’s access to abortion and contraception. “As a woman, all I care about is my private parts? I have nothing else on my mind, like, I don't know, everything else?” Another woman who voted against Udall, who is a self-declared feminist and fan of Gloria Steinem, told CNN, “I want grandkids. I want security. I don't want to worry about paying the bills…[Udall is] pandering on the choice issue, trying to scare women. I don't scare anymore. I'm beyond that.”

Grose concluded that a barrier to women becoming more represented in government is that fact that they choose not to run in the first place. She noted that maybe a black Republican woman, like Mia Love, hailing from “lily-white” Utah would inspire younger women to follow suit–and not “assume the electorate is stacked against them.”

This is a more levelheaded analysis. It also points out that perhaps Democrats became too comfortable with the 2012 exit polls. Demography is not destiny–and women voters are a shiftable voting bloc; a Gloria Steinem fan voted against Udall because she saw right through his malarkey and was more concerned about other issues.

Maybe it’s time for Democrats and feminists to end their monomaniacal obsession with abortion and birth control, but I doubt it.