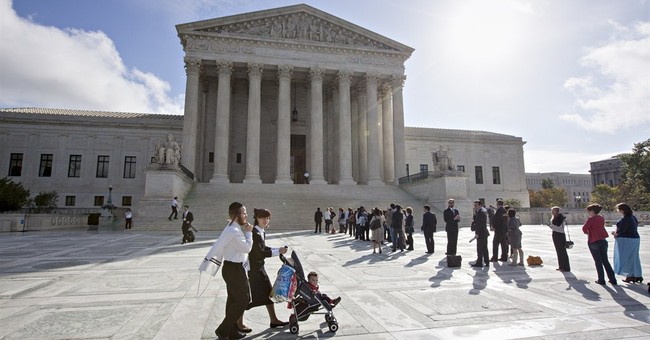 Obamacare is coming back to the Supreme Court. Today, the Court decided it would hear the new Obamacare challenge against health care subsidies that was originally argued in the D.C. Circuit Court Of Appeals last summer in Halbig v. Burwell.

The Court ruled in favor of the plaintiff, Jacqueline Halbig, but the Fourth Circuit Court of Appeals ruled in favor of Health and Human Services Secretary Sylvia Burwell in King v. Burwell, which Guy noted would increase the chance of this case going back to the Supreme Court.

This is the case that will be heard.

Yet, after the 2014 elections, let’s do a recap of the case that’s now on the docket. Jonathan Turley, a George Washington University law professor, gave a rundown of the case last summer:

The Halbig case challenges the massive federal subsidies in the form of tax credits made available to people with financial need who enroll in the program. In crafting the act, Congress created incentives for states to set up health insurance exchanges and disincentives for them to opt out. The law, for example, made the subsidies available only to those enrolled in insurance plans through exchanges "established by the state."

But despite that carrot — and to the great surprise of the administration — some 34 states opted not to establish their own exchanges, leaving it to the federal government to do so. This left the White House with a dilemma: If only those enrollees in states that created exchanges were eligible for subsidies, a huge pool of people would be unable to afford coverage, and the entire program would be in danger of collapse.

Indeed, the Halbig plaintiffs — individuals and small businesses in six states that didn't establish state exchanges — objected that, without the tax credits, they could have claimed exemption from the individual mandate penalty because they would be deemed unable to pay for the coverage. If the courts agree with them, the costs would go up in all 34 states that didn't establish state exchanges, and the resulting exemptions could lead to a mass exodus from Obamacare.

If the Court rules against the Obama administration, Obamacare is virtually gutted, which is why liberals might get queasy during this second bout (NYT):

The Supreme Court on Friday agreed to hear a new challenge to the Affordable Care Act, imperiling President Obama’s signature legislative achievement two years after it survived a separate Supreme Court challenge by a single vote.

The case, King v. Burwell, No. 14-114, concerns tax subsidies that are central to the operation of the health care law.

According to the challengers, those subsidies are not available in the states that have decided not to run the marketplaces for insurance coverage known as exchanges. Under the law, the federal government has stepped in to run exchanges in those states.

If the challengers are right, millions of people receiving subsidies would become ineligible for them, destabilizing and perhaps dooming the law.

The central question in the case is what to make of a provision in the law limiting subsidies to “an exchange established by the state.”

The challengers say the provision means that only people in states with their own exchanges can get subsidies. Congress made the distinction, they say, to encourage states to participate.

But the Internal Revenue Service has issued a regulation saying subsidies are allowed whether the exchange is run by a state or by the federal government. The challengers say that regulation is at odds with the law.

In response, Solicitor General Donald B. Verrilli Jr. told the justices that the I.R.S. interpretation was correct while the one offered by the challengers was “contrary to the act’s text and structure and would render the act unrecognizable to the Congress that passed it.”

Round II is upon us; let’s see what happens.