Hagan Can't Say If Obama Is A Strong Leader 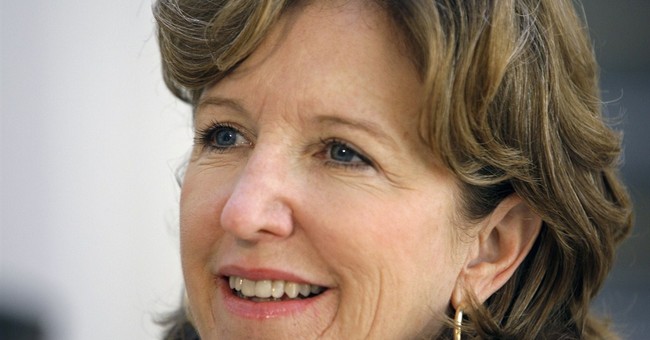 Vulnerable Democrats in red states trying to distance themselves from Obama are receiving no help from the leader of their party after he basically said they all support his agenda in an interview with Al Sharpton earlier this week.

In North Carolina, MSNBC’s Kasie Hunt asked incumbent Democratic Sen. Kay Hagan whether she felt if Obama was a strong leader. Let’s just say Hagan could not say anything–with a degree of confidence or certainty–that was positive about Obama. Straight up–she avoided answering the question.

“President Obama has a lot on his plate. And it seems like whether it’s the oil spill that took place a number of years ago in the Gulf, to this Ebola crisis now, to ISIS gaining strength, you look at all the combination of things like that.”

When pressed further on Obama exhibiting strong leadership qualities, Hagan deflected by saying we should have done more to respond to Ebola.

And it’s not just MSNBC that’s noticing how Democrats are trying to run away from the president this year; the New York Times reported that only one senate candidate–Rep. Gary Peters–has appeared with the president while stumping for him in Michigan. The support of the Ebola travel ban, which Hagan flip-flopped on, is one area where the Times notes Senate Democratic candidates are trying to create a veneer of independence from the Obama White House, although they did label it a “right wing talking point.”

Lastly, Jason Zengerie of The New Republic also tried to ask Hagan whether she thought Obama was a strong leader–and on what issues does she think he demonstrated those characteristics if he is one. It was another ride on the merry-go-round:

I asked her if she wanted to clarify her thoughts on whether she thought Obama was a strong leader. I thought her answer was worth sharing now.

“You know, I think that when issues come up for a vote, I stand for North Carolina, whether it’s a Democratic idea or a Republican idea, and I certainly oppose the president in issues where I think that it’s not right for our state,” Hagan said, going on to note her opposition to various trade deals and defense cuts, as well as her support for the Keystone Pipeline. “On the other hand, Speaker Tillis cannot name one issue, one issue, where he would oppose the president—not the president—where he would oppose his party.”

I asked Hagan what, in particular, she thought Obama had been strong on. “I go back to some of the issues that have affected our country,” she said. “I think on two issues in particular, just recently, he’s been slow to act on Ebola and on ISIS. When the BP spill took place in the Gulf, we were beginning to be slow, but then he put the resources to bear and the science to bear to help solve that very disastrous problem.”

So Hagan, who arguably rode Obama’s coattails into the Senate back in 2008, thinks that the one area where Obama’s shown strong leadership was on the Gulf oil spill four years ago—but, even there, he wasn’t particularly strong.

This is just another sign of how Obama’s falling approval numbers has become an anvil on Democrats this election cycle. And when you virtually vote with President Obama the entire time you are serving in the U.S. Senate, that could become a problem as well.