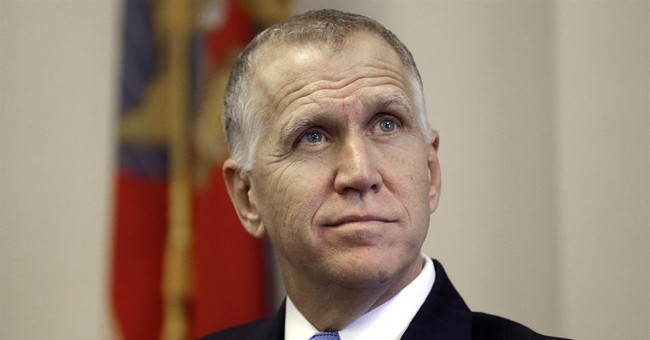 “I smell victory in the air,” she told a group of supporters in a packed room at the Raleigh Victory center last Saturday. Hagan’s Republican challenger, Thom Tillis, also addressed the crowd before starting a victory center tour across the state.

As he began to address his legion of loyal supporters, Tillis reaffirmed that the “campaign is going great.” He recalled how he was in the very same room back in 2010 when the NC GOP was planning to retake the State House of Representatives. Tillis was convinced the party would win 16 seats–and they did. In the legislature, Tillis noted that Republicans kept their promises of cutting taxes, spending, regulations, protecting life and promoting family.

Tillis added that keeping your promises is the easiest way to get elected, while breaking them is the fastest way to find yourself out of politics. He then gave a history of Hagan’s record of failure.

She voted for Obamacare, which gutted health care coverage for millions of Americans; Veterans Affairs is still a mess; and ISIS is on the rise thanks to Hagan being a rubber stamp for the Obama agenda. Sen. McCain, who dropped by North Carolina last week, told Tillis that he believes America has never been so vulnerable in his lifetime.

Sen. McCain in Goldsboro, NC: @ThomTillis is "the kind of proven leader we need in Washington." #NCSEN pic.twitter.com/QoNgG234a3

On Ebola, Hagan was against a travel ban and now she’s for it, which Tillis reacted by saying, “welcome.”

As for the stimulus allegations against Hagan, Tillis said, “that’s not leadership; it’s wrong.”

In all, Tillis is positioning himself to be an independent voice for North Carolinians; a person who will stand up to leaders of both parties who fail to act on reducing spending, cutting regulations, and creating a climate that is conducive to job growth. It takes courage and commitment to do that–and you can’t succeed if you, like Hagan, vote with the president and his party 96 percent of the time. That’s been a huge talking point for Republicans in this race.

As with any candidate, Tillis thanked his supporters for their time helping him in his race; he also mentioned how critical it is to be on the frontlines as the 2014 election cycle enters its final weeks.

With that said, he also mentioned how this race is his to lose. There’s still a lot of time for both sides to drop the ball. North Carolina is turning out to be one of the most, if not the most, expensive Senate races in our history.

When asked by a GOP strategist how does it feel to be the center of attention for a lot of national media outlets, Tillis said it didn’t leave him with any good feelings. It would mean his campaign would be in the crosshairs of the national Democrats and Harry Reid, which you have already seen in their incessant attacks on his education policies.

On the other hand, Tillis encouraged his supporters who have not yet watched any of the debates to do so; you can see that Sen. Hagan can’t be proud of anything she has done in the U.S. Senate.

RNC Chairman Reince Priebus also had a few words, calling North Carolina “ground zero” in the fight for the Senate majority this year. While Priebus thanked Tillis’ supporters, he warned them that freedom was “evaporating” in this country. With Obamacare, premiums are going up, people with coverage are being dropped, and doctors are being lost.

The chairman noted how Hagan was the point of the lance in peddling the “you can keep you doctor” Obamacare lie. Again, as for addressing the allegation that Hagan’s family profited from stimulus cash, Priebus simply said that one should Google “corruption” to get a sense of that story.

Before Priebus left the podium, he said, “If you want jobs, vote Republican."