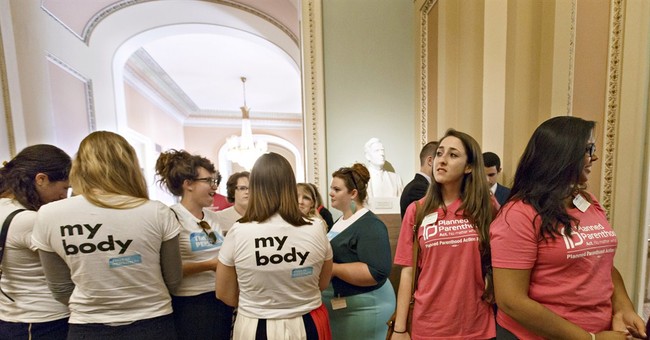 Republicans know they have problems with women voters, especially single urban women. They vowed to turn it around after Mitt’s clobbering amongst this demographic in 2012. What’s changed? Not much; and women are virtually unreceptive to the Republican Party or its policies. Is this the end? Nope. As George Will has said about Barry Goldwater, public opinion is shiftable sand; therefore, there are no permanent victories in a democracy (in our case, a republic). Then again, this new study does kind of sting (via Politico):

Women are “barely receptive” to Republicans’ policies, and the party does “especially poorly” with women in the Northeast and Midwest, according to an internal Crossroads GPS and American Action Network report obtained by POLITICO. It was presented to a small number of senior aides this month on Capitol Hill, according to multiple sources involved.

The report — “Republicans and Women Voters: Huge Challenges, Real Opportunities” — was the product of eight focus groups across the country and a poll of 800 registered female voters this summer. The large-scale project was a major undertaking for the GOP groups.

“The gender gap is hardly a new phenomenon, but nevertheless it’s important for conservatives to identify what policies best engage women, and our project found multiple opportunities,” said Dan Conston, a spokesman for the American Action Network. “It’s no surprise that conservatives have more work to do with women.”

Paul Lindsey, the spokesman for Rove-backed Crossroads GPS, said, “There are a number of House policymakers and staff who have been willing to focus on issues important to women, and we think it’s important that they are aware of the policy solutions that are available to help address these concerns.

The solutions offered include neutralizing Democratic attacks that the GOP doesn’t support “fairness” for women; “deal honestly with any disagreement on abortion, then move to other issues”; and “pursue policy innovations that inspire women voters to give the GOP a ‘fresh look.’”

Politico added that Republicans fail to reach women from different economic backgrounds, namely the rising demographic of female breadwinners. Currently, 40 percent of women are becoming the main source of income for America households. The story also noted that while the GOP holds a meager 3-point advantage on fiscal matters, they have high negatives on matters such as healthcare, tolerance of lifestyles, and looking out for their interests. Democrats enjoy a 39 percent advantage on the issues of making health care more affordable and tolerating other lifestyles. When asked who is looking out for their interest, Democrats hold a 40 percent advantage.

The piece also noted that women who say jobs, the economy, education, and health care as their top four issues vote overwhelmingly Democratic. But also said that Rep. Cathy McMorris Rodgers, the No.4 House Republican, is the point of the lance is bucking this trend.

Nevertheless, when the GOP talks about how Democrats expanding government, increase dependency, and curbing job opportunities as a result, “that message tested better than explaining that the GOP supports a number of policies that could help fairness for women.”

A more populist message could drive that narrative home. Women–and pretty much all voters–want authenticity in their candidates. Under these tough economic times, stories about enduring and triumphing over economic hardship resonate immensely. That’s now Rep. Kristi Noem of South Dakota was able to beat former Congresswoman Stephanie Herseth Sandlin in 2010.

The study and the polls included raise a few questions. Generally, to get authentic results, you’ll need 1,000 respondents for a national poll, 600 for a statewide poll, and 350 for a congressional poll; the poll was only 800 registered female voters–and it’s likely voters that will give you a more accurate projection in an election.

While not a conservative, New Jersey Republican Governor Chris Christie dominated in almost every demographic during his 2013 re-election bid. In a blue state, he won women voters even with a woman running on the Democratic ticket, State Sen. Barbara Buono. Republicans can do this; they can win, or at least be competitive, if they hone their messaging correctly.

In Virginia, while Ken Cuccinelli lost, all he had to do was win the same group of voters that Romney did in 2012.  Stuart Rothenberg at Roll Call said [emphasis mine]:

The Republican nominee for governor [Cuccinelli] won a plurality of male voters (48 percent), but well below the 51 percent that Romney won in the state last year. Cuccinelli would have gained an additional 48,000 votes if he had matched Romney’s percentage, much of which would have come from McAuliffe, thereby completely erasing the Democrat’s 55,100 victory margin. (See Virginia’s total vote here.)

And if you don’t want to focus on gender, the marital status numbers tell the same story. Romney won 55 percent of married voters in Virginia last year, while Cuccinelli won only 50 percent of them this year. That’s about 75,400 fewer married voters than a Romney-like Republican gubernatorial nominee should have drawn.

Though you hear a lot about the changing face of the electorate, both nationally and in Virginia, that’s not why Cuccinelli lost last week.

The Virginia election in 2013 was one where the Republican nominee would have won merely by attracting the votes of the same people who voted for Mitt Romney. The party’s candidate for governor did not need to improve his showing among young voters, African-Americans, Hispanics or unmarried women. He just needed to get white guys and their wives.

Yet, the GOP shouldn’t bank on this to just focus on married voters. The study said that the Republicans continue to do well with married women, but unmarried women, who really lean towards the Democrats, are outpacing their share of the vote.  And, in Virginia, they overwhelming voted for McAuliffe.

Nevertheless, to put things into perspective, Cuccinelli lost by 57,535 votes. More married voters could’ve been the difference, but his campaign wasn’t exceptional in the slightest. Some folks blame pseudo-Libertarian Rob Sarvis for spoiling the election when in fact; he took away more votes from McAuliffe if you look at the results county-by-county.

In all, Republicans know they have trouble with women, they’ve seen success in winning this demographic in past elections, they certainly have the ideas, and they have the politicians who can sell them without pulling a Todd Akin. Let’s get to it.

Hezbollah Hoarded Fertilizer That Blew Up Beirut, Planned to Use it Against Israel in 'Nuclear' Style Attack
Katie Pavlich
Ted Cruz Grills Sally Yates After Saying Obama Admin Was Not Surveilling Trump's Campaign
Julio Rosas
Dianne Feinstein Was Not Happy With GOP Senator Slamming Sally Yates for Her 'I Know Nothing' Antics
Matt Vespa
Sen. Josh Hawley Rips Into the DOJ and FBI: Nobody Seems to Know Anything in This Government!
Julio Rosas