So, It Looks Like Warren Isn't Running For President 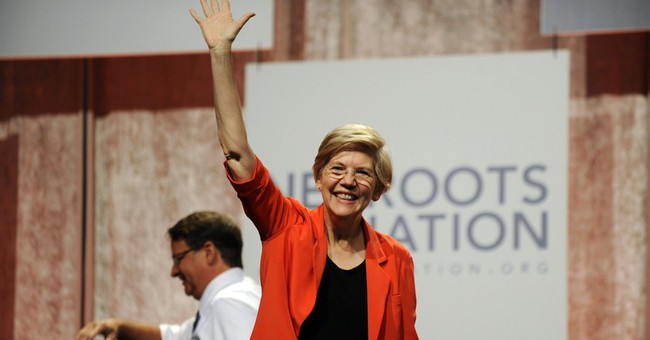 At Netroots, RedState’s Dan Spencer and I looked on as Democratic Senator from Massachusetts Senator Elizabeth Warren rallied the troops with her pugnacious brand of liberal populism. “She scares me,” said Spencer as we left the main ballroom, noting her unabashedly progressive leanings. What scares me about Warren, besides her positions on policy, is how she's become where the Democratic base aligns today. So, does this mean a future 2016 candidacy?

Last month, at a campaign stop for Democratic Senate candidate Alison Lundergan Grimes, Warren said in the strongest terms possible, that she’s not running for president (via Boston Globe):

Still, the Washington Examiner’s Byron York wrote a good piece last April making the case for why 2016 is the time for Warren to run. Although, Warren’s donor base is warning her butt out of 2016 and let Hillary Clinton clinch the 2016 nomination; it’s her time, right? They’re also making it known that her candidacy could atomize the base. Then again, not everyone is ready for Hillary (via Daily Beast):

“If Elizabeth called me up and said, ‘I am thinking of running for president,’ I would say, ‘Elizabeth, are you out of your goddamn mind?’” said one New York-based donor who has hosted Warren in his living room. “I really like Elizabeth, but if Hillary is in the race it just makes no sense.”

This conversation was echoed again and again in more than a dozen interviews with big-ticket Democratic donors in Warren’s hometown of Cambridge, Massachusetts, and in cities that operate as ATMs for the Democratic money machine, like New York, Washington, Los Angeles, and San Francisco. Over and over again, the message was the same: Stay in the Senate, Liz, stay in the Senate.

To be clear, the world of Warren-backers isn’t entirely ready for Hillary, and some are holding out hope that the Massachusetts senator joins the race.

“I think it would be very good if she were the nominee,” said Marc Weiss, a tech entrepreneur who helped fund a nascent Warren for Senate campaign soon after she announced. “She is closer to my views on almost every issue. I would be very enthusiastic if she decided to run.”

Well, it seems as if she has made her decision. Right now, she’s campaigning for her fellow Democrats across the country ahead of the 2014 midterms. That’s her focus, as indicated by the Burlington Free Press last month, where she delivered a few speeches in Vermont; consolidating her reputation as the point of the lance in this renewed populist resurgence.