The Case for Cosmopolitan Conservatism 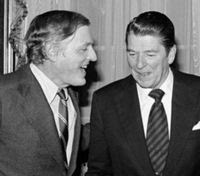 Last week, we mourned the passing of Jack Kemp -- and this afternoon, friends and family will gather for a memorial service honoring his life. Much of the talk about Kemp noted his days as a football player -- and how that led him to life experiences he otherwise might not have had. As TIME reports,

After growing up in largely white LA of the 1940s, he confronted racial prejudice as a young professional quarterback playing games occasionally in the Jim Crow South. When his (then) Los Angeles Chargers traveled to Houston for a 1960 game, the team had to stay at University of Houston dorms because no hotels would accept black players. Kemp joined other teammates in bolting a movie theater that restricted black members to the balcony. Four years later, Kemp arrived in New Orleans as team captain for the 1964 American Football League All-Star game. After watching black players turned away from nightclubs and "white" taxis, he supported a boycott of the city. The game was moved to Houston, which had progressed farther along the path of desegregation.

Ronald Reagan had similar experiences as a football player at Eureka College. And as a movie star living in Hollywood, it's safe to say Reagan was exposed to a wide variety of ideas and people. A lot has been written about the importance of Reagan's "General Electric years", in terms of how his experience touring the country and speaking to workers acted as a sort of "focus group," exposing him to middle-American concerns. But his experience as a member of the Hollywood elite is probably under-appreciated, inasmuch as it helped him connect with urban voters, newspaper publishers, and other media elites.It's also interesting to note that politics was a second career for both Kemp and Reagan. They had both enjoyed successful, high-profile, careers before getting involved in the business of politics. This exposed them to people of different races, income levels, backgrounds, etc. Both were also involved with unions -- in the case of Reagan it was as head of the screen actor's guild and in the case of Kemp it was the AFL Players Association. If you stop to think about it, some of the conservative movement's most effective advocates have been quite cosmopolitan. Charlton Heston, the acclaimed film star who marched with Dr. King and went on to lead the NRA, was a terrific conservative spokesman -- as was William F. Buckley, the enfant terrible of the conservative cause, who, though not a movie star or famous athlete, was a wealthy and erudite conservative who essentially lived like a movie star. While I caution conservatives from adopting an elitist mentality which looks down our noses at the "unwashed masses" and their leaders like Sarah Palin or Mike Huckabee, I do think it's worth noting that some of our most effective conservative leaders -- like Reagan, Kemp, Heston and Buckley -- were anything but local politicians, by trade.While experience, no doubt, informs policy decisions, it is important to note that my hypothesis is that a cosmopolitan background may help create conservative leaders with the right temperament for today's world. To be sure, the men I mentioned did not become "moderates" -- they were conservatives. For example, Reagan's experiences in Hollywood didn't cause him to "moderate" or become a liberal Republican -- but they did help him communicate with urban Americans or elites who otherwise may not have given him a chance.Temperament is important. Though educated at Yale, George W. Bush was, no doubt, hurt by his Texas swagger. One also wonders how many of Palin's problems might have been avoided if she hadn't been essentially plucked from Alaska. To be sure, it's likely the liberal media machine would have been just as vicious to her -- but a more "worldly" Palin might also have handled the Couric interview better, too.The great Human Events reporter John Gizzi recently told me over lunch that the RNC Chairman who recruited Kemp to run for Congress read only the sports and society pages in each district newspaper -- that's how he recruited Kemp -- and other non-traditional "politicians" to run for office. This is not to say we should begin looking to movie stars to lead the movement -- but it is to say we must be creative (Cal Ripken for MD Gov???).Sadly, in the last five years we have lost Reagan, Heston, Buckley, and now Kemp. But I find the similarities between them to be fascinating: They were all intelligent men who didn't need politics. They were, clearly, among the most effective conservative leaders of the last half of the 20th century. Despite a tremendous appreciation and reverence for average Americans, they were all cosmopolitan -- exposed to many different ideas and different types of people. And lastly, it's also safe to say they were, in fact, all solid conservatives -- not "moderates"...
In Final Weeks of Virginia's Gubernatorial Race, It's Clear Where Momentum Is
Rebecca Downs
Trump Has An Idea on Who Should Run for Governor of Wisconsin
Rebecca Downs
Democrats Have Some Really Bad News for Fierce Trump Critic Adam Kinzinger
Rebecca Downs
President Joe Biden May Not Be Able to Escape This Major Crisis Before the Midterms