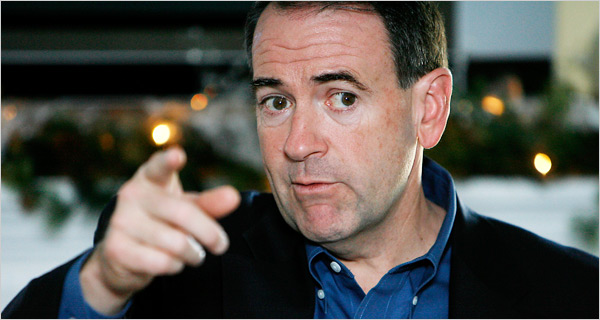 If the released excerpts are any indication, Mike Huckabee's new book (which goes on sale tomorrow) will be a must-read, tell-all account of the 2008 primary campaign that political junkies will gobble-up.  Huck seems to pull no punches here.


Mitt Romney, Huckabee's principle rival in Iowa, comes in for the roughest treatment. Huckabee writes that the former Massachusetts Governor's record was "anything but conservative until he changed the light bulbs in his chandelier in time to run for president." He notes that Romney declined to make a phone call of congratulations after Huckabee beat the oddsmakers to win the Iowa caucuses, "which we took as a sign of total disrespect." He mocks Romney for suggesting, during one debate, more investment in high-yield stocks as a solution to economic woes. "Let them eat stocks!" Huckabee jokes.

His treatment of former candidate Fred Thompson, a rival who helped sink Huckabee's upstart ambitions in South Carolina, is somewhat more favorable, if only because it is less personal. Huckabee maintains that Thompson's biggest mistake was strategic: He didn't understand the need to expand the Republican party beyond its base. "Fred Thompson never did grasp the dynamics of the race or the country, and his amazingly lackluster campaign reflected just how disconnected he was with the people, despite the anticipation and expectation that greeted his candidacy," Huckabee writes.

... Huckabee also goes after Christian conservatives who did not support his candidacy:

He calls out Pat Robertson, the Virginia-based televangelist, and Dr. Bob Jones III, chancellor of Bob Jones University in South Carolina, for endorsing Rudy Giuliani and Romney, respectively. He also has words for the Texas-based Rev. John Hagee, who endorsed the more moderate John McCain in the primaries, as someone who was drawn to the eventual Republican nominee because of the lure of power. Huckabee speaks to Hagee by phone before the McCain endorsement, while the former Arkansas Governor is preparing for a spot on Saturday Night Live. "I asked if he had prayed about this and believed this was what the Lord wanted him to do," Huckabee writes of his conversation with Hagee. "I didn't get a straight answer." Months later, McCain rejected Hagee's endorsement because of controversial remarks the pastor had made about biblical interpretations.

In a chapter entitled "Faux-Cons: Worse than Liberalism,"Huckabee identifies what he calls the "real threat" to the Republican Party: "libertarianism masked as conservatism." He is not so much concerned with the libertarian candidate Ron Paul's Republican supporters, as he is with a strain of mainstream fiscal conservative thought that demands ideological purity, seeing any tax increase as apostasy and leaving little room for government-driven solutions to people's problems. "I don't take issue with what they believe, but the smugness with which they believe it," writes Huckabee, who raised some taxes as a governor and cut other deals with his state's Democratic legislature. "Faux-Cons aren't interested in spirited or thoughtful debate, because such an endeavor requires accountability for the logical conclusion of their argument." Among his targets is the Club For Growth, a group that tarred Huckabee as insufficiently conservative in the primaries and ran television ads with funding from one of Huckabee's longtime Arkansas political foes, Jackson T. Stephens Jr.

... One thought immediately strikes me:  This sort of candor is rare among politicians who have futures (or believe they have futures).  This is the candidate's equivalent of writing a tell-all Scott McClellanesque memoir.  It will surely generate a lot of buzz and sells a lot of copies, but does it help him win friends and influence people???

... Is this an indication that he has no future presidential ambitions???  Does he believe that this is his 15 minutes, and he has to quickly cash-in now -- while there is still interest in him?  Or is he egotistical enough to believe that he can write this sort of book today, and then use his great talent for talking to smooth things over later?

Lastly, TIME's headline also strikes me as humorous:  "Huckabee, Finally, Settles His Campaign Scores..."  (.. Finally???  When did he stop attacking his opponents???)