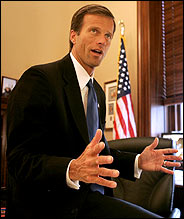 I just got off the phone with Sen. John Thune, who's become one of the GOP point-men on the Minnesota Senate recount due to his experience with his own very close Senate loss in 2002. One of the first things he said to me was that Norm Coleman was up against a "very partisan Democrat Secretary or State" in Mark Ritchie. He also said that the Dems are "clearly going to do everything they can" to make Al Franken a Senator (despite the fact that he lost).

Ironically, before the interview ended, Amanda posted the headline "MN Secretary of State Bashes Coleman"…so I asked Sen. Thune about Mr. Ritchie's comments that Coleman is trying to "win at any price".  He rather indignantly answered the question with another question, "Who started out on top?"We should definitely be keeping a very close eye on Mr. Ritchie.