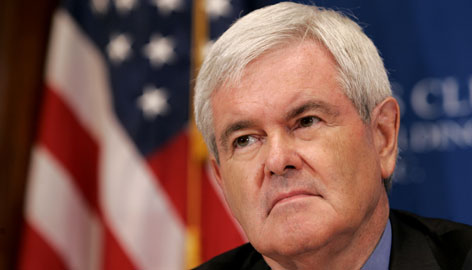 I went through my tapes from yesterday's Newt presser, and pulled out a few of the most interesting quotes:

"I find it inconceivable that the treasury and the federal reserve could manage the entire economy of Wall Street … I know of no occasion in the American system when you’ve been able to take over this large a sector in the American economy and run it in a central Bureaucracy.  This is what we tell Russians and French and Italians to never do.

… Either McCain is going to go along – in which case the establishment will have the “fix” in.   You’ll have McCain and Obama reluctantly supporting whatever stunningly bad bill is written by people like Dodd and Barney Frank.

And so you’ll have the guy who got the money from Fannie and Freddie writing the bill to take care of Fannie and Freddie and adding into it whatever goodies they think they need.  Remember, they added 500 million a year for ACORN, a left-wing organization, in order to get the housing bill through this summer.  So who knows what they’re going to dump into this one.  And either McCain will reluctantly go along – and I think Obama clearly is going to go along.

Or you’re going to see McCain decide, much in the way he did with picking Palin, that, in fact, he’s a genuine Maverick and he genuinely defends the taxpayer -- and this is a terrible bill.  If the latter happens, I think you will see over-night the emergence of a McCain reform wing in the Republican Party, and you’ll see House and Senate members siding with McCain by overwhelming numbers.  And then you’ll be in a very different environment."

When asked why Gingrich was so opposed to the bailout, he answered he became decisively opposed after reading Paulson's original description which gave him $700 billion with,

"no oversight, no judicial review, no accountability.  And I thought, you know, if Putin had written that, I'd understand it.  But the idea that an American Secretary of Treasury so totally misunderstood our Constitution that he would ask for a 700 billion blank check, said to me these guys are just totally out-of-touch with reality."