Media in the Tank? Deja vu all over again ... 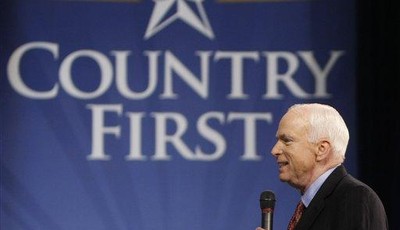 With all the talk about John McCain's battle with the NYT, I found this quote to be interesting:

"He loved the Senate, he loved Arizona, he loved his wife, and he hated being told what to do ... He may have also sensed that his popularity, which was considerable, would change once he became a candidate for president.  As many people have discovered, a politician can go to long way in Washington until he becomes a serious presidential candidate.  At that precise moment the Washington press corps digs in, and reputations are destroyed in no time."

The author goes on to write that prior to running for president, this person wrote a popular book, was subject of numerous positive  magazine articles, and was a fixture on national television.

... I should probably point out that this quote is not in reference to John McCain.  It actually comes from Alfred Regnery's book, "Upstream," and refers to Barry Goldwater's 1964 race.

Of course, it could just as easily have been written about John McCain in 2008.  Prior to winning the GOP nomination, McCain was the toast of the liberal media -- a group he famously referred to as his "base".

And when his campaign was down and out, the NYT endorsed him.  But just months later -- after winning the nomination -- the "newspaper of record" launched a scurrilous attack against him, alleging affair with a female lobbyist.  And their attacks have not let up.  Of course, they claim McCain has changed -- which is more convenient than admitting that their coverage has changed because he now poses a threat to their favorite liberal candidate.

Of course, the fact that we have a liberal bias in this country should not surprise anyone.  Still, it is interesting to see that this phenomenon of the liberal immediately turning on a popular Republican once he wins the nomination is a long-standing practice that has been with us for decades.  Goldwater, after all, saw it coming more than forty years ago.  It's deja vu all over again ...
Israel Launches Brilliant and Devastating Attack on Huddled Hamas Terrorists
Katie Pavlich
Texas Law Enforcement Plays Whack-a-Mole as Human Smugglers Take Advantage of Border Crisis