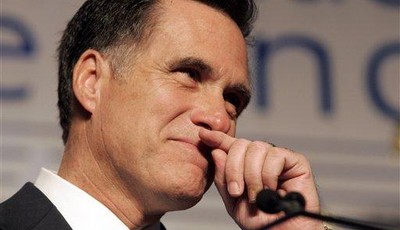 In 1976 the Ford vs. Reagan campaign for the Republican presidential nomination got so heated it looked as if my father and Jerry Ford would never again talk to one another.

When it was over and Ford had won, what did Ronald Reagan do? He simply went all-out to help Ford win his re-election, as did I and as did my sister Maureen. My dad simply followed his rule of backing the Republican candidate no matter who he was.

Of course, as we have noted here on several occasions -- Mitt Romney seems to be following the Ronald Reagan 1976 playbook.  His CPAC speech has been compared to Reagan's '76 convention speech -- and now -- his endorsement is being compared to Reagan's support of Ford ...

But while Ronald Reagan's loss -- and his re-birth in '80 -- is a fairly recent model to use as a comarision, the archetype is almost as old as time.  As Jung would put it, this entire narrative has long been a part of our “collective unconscious.”

In essence, whether he's doing it consciously. or not, Mitt Romney is seeking to tap into a mythological narrative called the "Hero's Journey."

If you've read Arthur or the Odyssey -- or have seen Star Wars or Rocky -- you are familiar with the idea.  Before reaching the "promised land," a hero must first endure his "wilderness years."  This is essentially a right of passage or initiation (I've written that Mitt Romney finally passed his "Initiation" into the conservative movement.)

Of course, the last stage of the "Hero's Journey" is when the hero reaches his destiny and in a sense, rises from the dead.  If you're a movie fan, this is the part when Rocky finally wins or when Han Solo and Luke Skywalker are given their awards.  Or if you like politics, it's the day Reagan wins after everyone thought he was finished in '76.

In Mitt Romney's scenario, he becomes the Republican standard-bearer, and ultimately is elected president.
'Governor Who?' Joe Biden Thinks He's Quite the Jokester with Unprovoked Shots Against Ron DeSantis
Rebecca Downs