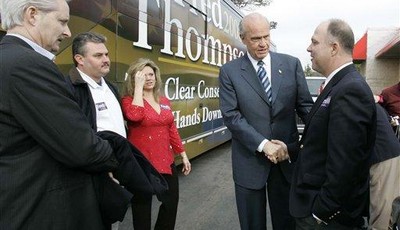 The once cordial relationship between Mike Huckabee and McCain/Thompson has soured. Earlier today, the Thompson campaign implied to me that they believe Huckabee, himself, is behind the "push-polls" taking place in South Carolina.

And just now -- on Fox -- Neil Cavuto asked Fred Thompson about the rumors being spread that he is running for office strictly to help John McCain.

Thompson responded with this:

"Ed Rollins (Huckabee's advisor) is a wiley old fox, and if they can goad me into attacking McCain, they won't have to.

... That same campaign manager of his is the one who said the Reagan colation is dead ... I think they want to take us down a more moderate path and be more like the Democrats in a lot of ways."

Update:  Cavuto just went to the phones and talked to Ed Rollins, himself.  Rollins quickly launched an attack on Thompson, saying:

Then, Rollins got personal against Thompson, saying:

I don't think anybody has ever called me a moderate, I mean Fred's the one who is the moderate when he joined McCain/Feingold.