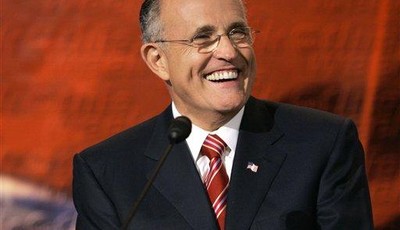 The gun tiff between Fred Thompson and Rudy Giuliani provoked some blogospheric buzz. All the talk was about the not-yet-a-candidate Thompson making a “not-very-veiled swipe” at the former New York mayor.

Thompson’s commentary (and the reaction) illustrated the differences between himself and Giuliani when it comes to guns. But almost as interesting, at least, to me, were the two candidates' media approaches. Thompson started the "scrap" with a post on his weblog. Since early this year when hints were bandied around about a possible Presidential bid Thompson has used guest posts on weblogs like Redstate and Pajamas Media to get his message out. It's no surprise Fred used this new medium to talk about gun laws.

The Giuliani campaign's response wasn't a weblog post of their own--there is no weblog on the campaign website--but to first send out an unnamed spokesman saying, "The news here is the first 527 attack is from Fred Thompson and not George Soros." Later, communications director Katie Levinson issued a statement via e-mail saying in part,

Those who live in New York in the real world - not on TV - know that Rudy Giuliani's record of making the city safe for families speaks for itself. No amount of political theater will change that."

To sum it up Thompson grasping the power of New Media put Giuliani on the defensive. Team Rudy's reaction was like what campaigns did in 1988. Back then a reporter would write a story about one candidate attacking another. The next day, the target would trot out their spokesman to make a statement. In 2007 that dynamic has changed. Now, a candidate (or proto-candidate in Thompson's case) can create buzz simply by publishing a weblog post. Opposing candidates can't be flat-footed. The result? Glenn Reynolds declared Fred the victor in this clash. Some of that came from the substance of Thompson's argument, some from the weakness of the Giuliani team's response, and some from nature of the response itself.

If the Giuliani campaign had a weblog of their own they could have offered a response to Fred faster than waiting for a reporter to write up something from a quote passed onto them. What would have been even better was if Rudy released a video response (I felt the same way when the IAFF attacked Rudy in a video, but he responded with a press release). Giuliani is a telegenic man. Standing up to Rep. Ron Paul in the first GOP debates showed he knows how to use television to create a dramatic presence. A two-minute video posted to the Giuliani website would have reinforced his image as a forceful leader. A great video posted to YouTube could have gone viral turning the story into how Rudy played New Media jiu-jitsu all over Fred.

Team Rudy didn't take advantage of the technology at hand. They played this like it was three campaign life cycles ago. The old-school, top-down, send-out-the-spokeman approach only reinforces the authoritarian image some skeptics already have of Giuliani. In this instance we see Fred Thompson trusting New Media while Rudy Giuliani can't take that leap of faith.

In fairness, Rudy has consistently been in first place in most national polls (so whatever he's doing -- or not doing -- hasn't hurt him ... yet).  His team has also reached out to bloggers, including, yours truly.  But it would be wrong to conclude that because things have worked so far, that there is no need to change.  In the long run, my fear is that his failure to adapt to cutting edge technology may eventually catch up to him ....