Lame: NYT Suggests McCain Might Not Even Be Qualified to Run For President 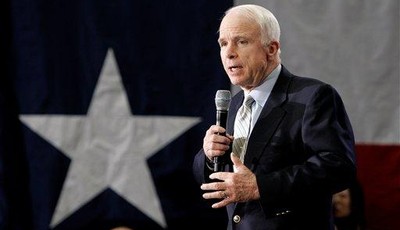 Why? Because he was born on a military installation outside the United States while his father was serving there (in the Panama Canal Zone):

The phrase “natural born” was in early drafts of the Constitution. Scholars say notes of the Constitutional Convention give away little of the intent of the framers. Its origin may be traced to a letter from John Jay to George Washington, with Jay suggesting that to prevent foreigners from becoming commander in chief, the Constitution needed to “declare expressly” that only a natural-born citizen could be president.

Ms. Duggin and others who have explored the arcane subject in depth say legal argument and basic fairness may indeed be on the side of Mr. McCain, a longtime member of Congress from Arizona. But multiple experts and scholarly reviews say the issue has never been definitively resolved by either Congress or the Supreme Court.

The smears are going to get sillier and sillier. I guess the good news is this is the best they can come up with. Closing quote:

“If I were on the Supreme Court, I would decide for John McCain,” Ms. Pryor said in a recent interview. “But it is certainly not a frivolous issue.”

Unless you're a Democrat running for President, in which case it would be frivolous indeed! Maybe liberals will start employing the stupid middle-name tactic and refer to him as "John Panamanian McCain" from here on out.