Clinton Cries in Connecticut (Update: Am I the Girl Who Cried 'Cry'!) 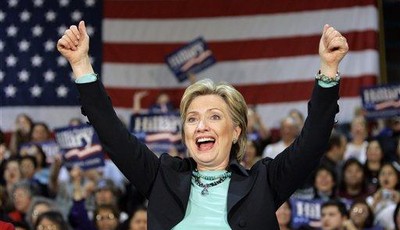 Sen. Hillary Clinton teared up this morning at an event at the Yale Child Study Center, where she worked while in law school in the early 1970s.

A doctor, who was introducing Clinton, began to choke up, leading Clinton's eyes to fill with tears, which she wiped out of her left eye. At the time, the doctor was saying how proud he was that sheepskin-coat, bell-bottom-wearing young woman he met in 1972 was now running for president.

"Well, I said I would not tear up; already we're not exactly on the path," Clinton said with emotion after the introduction.

Update: Allah says he thinks the tears are genuine. I say nope. If she thought tears would be more damaging than beneficial, why would she make verbal reference to them instead of just sucking it up and moving along. She could have covered better than, "Well, I said I would not tear up."She might as well have been wearing a neon sign over her head saying "Women voters, look here for empathy and new, improved, life-like feelings!" I say the tears are just like a talking point; she keeps repeating them for newcomers to the race. Update: Allah's added video of the Hillary incident, and it looks like we have an alternative explanation-- a coughing fit. Alas, was I too quick to think ill of our Hill. I should know better. I don't know, though. Why make reference to "tearing up" if you're not tearing up? Nontheless, it wasn't much of a misty moment, if that's all there is to see.
Yale Doctor: I'd Pull a Healthy Kid From School Before Giving Them the COVID Vaccine
Katie Pavlich
Pete Buttigieg Makes Clear He Still Won't Be Doing His Taxpayer Funded Job
Katie Pavlich
New Poll Reaffirms the Virginia Governor's Race Will Be Neck-And-Neck