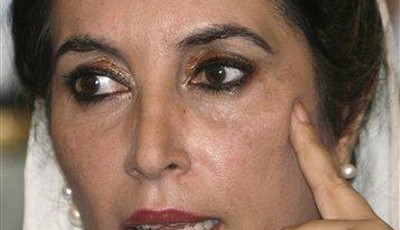 The opposition leader, who had survived one assassination attempt in October, was in Rawalpindi when she was attacked. She was reportedly shot twice before a blast went off, further injuring her and killing at least 12 others. Awful news.

“At 6:16 p.m. she expired,” said Wasif Ali Khan, a member of Ms. Bhutto’s party who was at Rawalpindi General Hospital where she was taken after the attack, according to The Associated Press.

Hundreds of supporters had gathered at the rally, which was being held at Liaqut Bagh, a park that is a common venue for political rallies and speeches, in Rawalpindi, the garrison city adjacent to the capital.

Amid the confusion after the explosion, the site was littered with pools of blood. Shoes and caps of party workers were lying on the asphalt, and shards of glass were strewn about the ground.

Farah Ispahani, a party official from Ms. Bhutto’s party, said: “It is too soon to confirm the number of dead from the party’s side. Private television channels are reporting 20 dead.” Television channels were also quoting police sources as saying that at least 14 people were dead.

Update: They tried to take out another former prime minister, too:

The latest bombing was the second outbreak of political violence in Pakistan today. Earlier, gunmen opened fire on supporters of another former prime minister, Nawaz Sharif, from an office of the party that supports President Musharraf, killing four Sharif supporters, police said.

Mr Sharif was several kilometres away from the shooting and was on his way to Rawalpindi after attending a rally.

Update: Here's an eerie preview story about the upcoming rally from Dec. 26. All was calm in Rawalpindi, the same place Bhutto's father, a former prime minister, was hanged in 1979 in the aftermath of a military coup.

The unusual calm at the site on early Wednesday evening, broken by a youth playing on a guitar with a singing partner in what they called a training session, contrasted with the hustle and bustle of election in the nearby city where Bhutto’s imposing picture was on almost every election banner or poster of PPP candidates for the city’s three National Assembly and five Punjab assembly seats to be contested on Jan 8 by all the three major parties, which include the previous ruling Pakistan Muslim League-Q (PML-Q) and Pakistan Muslim-N (PML-N).

Riaz Malik, of the opposition Pakistan Movement for Justice party (Pakistan Tehreek-e-Insaf), warned: "The impact will be that Pakistan is in more turmoil - it will be the start of civil war in Pakistan.

"There is a very real danger of civil war in Pakistan."

He said that while suspicion was likely to fall on insurgent groups based in the northern tribal areas near the Afghan border, the killing was bound to increase dissatisfaction with the regime of President Pervez Musharraf.

"There will be a lot of fingers pointed at the government," he said.

General Zia-ul-Haq was killed in a plane crash in 1988 and in December of that year Ms Bhutto became Prime Minister at the age of 35.

But by 1990 her administration was over amid charges of corruption and Zia's protege Nawaz Sharif took over the reins of power.

However, Ms Bhutto's political career was far from over. She returned as Prime Minister in 1993 only to fall from power again in 1996 amid more corruption scandals.

More than a decade of exile - some of it spent in London - was to follow before she returned to Pakistan in autumn this year to prepare for elections in 2008. More than 130 people were killed and around 450 injured in a suicide bomb attack in October 2007 while Ms Bhutto was en route to a rally in Karachi. She was unhurt.

She said of her life:

"I didn't choose this life, it chose me,'' Bhutto wrote in the preface to the second edition of her autobiography, Daughter of the East, in April 2007. ``Born in Pakistan, my life mirrors its turbulence, its tragedies and its triumphs. Pakistan is no ordinary country. And mine has been no ordinary life.''

Pakistan is at a crossroads. We citizens are faced with a decisive choice this January 8th, election day. We can turn our backs on the years of dictatorship, fundamentalism, and economic decline. The Pakistan People's Party is ready to lead our beloved country into a brighter future of prosperity, peace, and security. For you and for our country's future, I am ready to lead.

Update: U.S. checking into al Qaeda's claim of responsibility for the murder:

While al Qaeda is considered by the U.S. to be a likely suspect in the assassination of former Pakistani Prime Minister Banazir Bhutto, U.S. intelligence officials say they cannot confirm an initial claim of responsibility for the attack, supposedly from an al Qaeda leader in Afghanistan.

An obscure Italian Web site said Mustafa Abu al-Yazid, al Qaeda's commander in Afghanistan, told its reporter in a phone call, "We terminated the most precious American asset which vowed to defeat [the] mujahedeen."

It said the decision to assassinate Bhutto was made by al Qaeda's No. 2 leader, Ayman al Zawahri in October. Before joining Osama bin Laden in Afghanistan, Zawahri was imprisoned in Egypt for his role in the assassination of then-Egyptian President Anwar Sadat.