A mural outside the Merrimack Restaurant, a happening stop on the New Hampshire primary trail. Looks like, from left to right, Gary Hart (maybe?), Steve Forbes, Bill Clinton, Joe Lieberman, and Bob Dole. 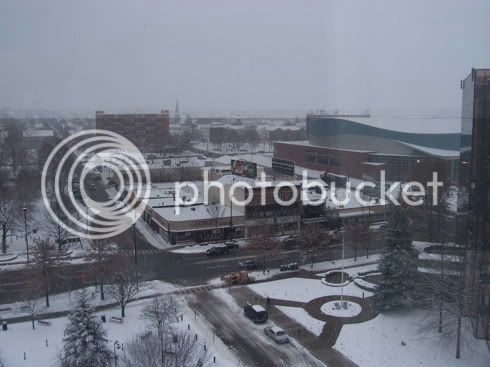 The view from my hotel. A bit different from last week.

In New Hampshire, even the children's placemats are political!

Gasp! It's Gideon Yago! His glasses are so dreamy and intellectual.

Chris Cillizza of the Washington Post has been crowned least dorky and socially awkward political reporter of them all by MTV and asked to help anchor these events. Congrats, Chris! (He's wearing a velour jacket, according to Gideon. Bold!)Also, Jim Geraghty reports on how Gideon had trouble keeping up with McCain during the pre-taping of McCain's entry.

MTV's Gideon Yago - wearing those square intellectual glasses - is there to greet him, and, he thinks, to do a quick pre-interview. "Senator McCain, are you excited to be participating in tonight's presidential dialogue?"

"I am excited. Hey gang! I'm about to go do Hardball now, but I'll see you all inside!" And with that, he's off.

MTV is airing the forum live at 7 p.m. For all the potential problems with this type of event, which could be plenty, these Presidential Dialogues are undoubtedly some of the best programming an MTV addict sees these days. John Edwards and Barack Obama have done them in the past, and we're at Southern New Hampshire University for this one.Disclosure: MySpace foot the bill for me to come to N.H. to cover this event. Interpret my take as you wish, based on that info.