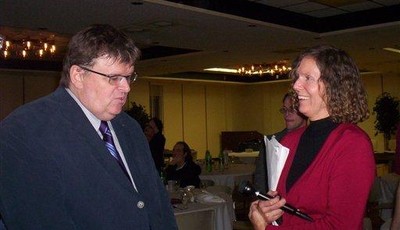 Husband-and-wife documentarians Debbie Melnyck and Rick Caine (and self-proclaimed lefties) subjected him to his signature brand of ambush interview after he refused to sit down on camera with them, and followed him around the country as he promoted Fahrenheit 9/11 as they tried to profile his methods.

The product, "Manufacturing Dissent" premiered in Austin, Texas this weekend at the storied indy film and music festival, South by Southwest. I'm glad to hear it got a good response, and very little rudeness, at that very liberal gathering:

At their own premiere Saturday night, the Toronto-based filmmakersexpected pro-Moore plants in the audience heckling or trying tootherwise sabotage the screening, but it turned out to be a tame affair.

"Itwent really well," Melnyk said. "People really liked the film andlaughed at the right spots and got the movie and we're really happyabout it."

Melnyk and Cain say they are fans of Mikey's, if for no other reason than he made the documentary form a viable business model, but as they began to dig around about Moore, they came to doubt his methods more and more.

For instance, his 1989 documentary "Roger & Me," the "story of a rebel and his mike" is about, well, here's the IMDB description:

Director Michael Moore pursues GM CEO Roger Smith to confront him aboutthe harm he did to Flint, Michigan with his massive downsizing.

And, the cowardly Smith won't face Mighty Mike and his Mike of Populist Rebellion, right? Hence, the movie's poster shot of Mike with his mike and an empty seat, right? Wrong (emphasis mine).

Among their revelations in the movie, which had its world premiereSaturday night at the South by Southwest film festival: That Mooreactually did speak with then-General Motors chairman Roger Smith, theevasive subject of his 1989 debut "Roger & Me," but chose towithhold that footage from the final cut...

The fact that Moore spoke with Smith, including a lengthyquestion-and-answer exchange during a May 1987 GM shareholders meeting,first was reported in a Premiere magazine article three years later.Transcripts of the discussion had been leaked to the magazine, and aclip of the meeting appeared in "Manufacturing Dissent." Moore alsoreportedly interviewed Smith on camera in January 1988 at the WaldorfAstoria hotel in New York.

Of course, no one hears much about how the cowardly Smith confronted Moore and his Societally Oppressed But Charmingly Scrappy Mike of the American Working Man. Um, twice.

"We're a bit disappointed and disillusioned with Michael," Melnyk said...

One professor, a former rep for Moore, said the revelations about Moore and Roger Smith in "Manufacturing Dissent" were enough to make his students "dumbstruck:"

"I'm still a big proponent of 'Roger & Me,' especially for itsimportance in American documentary making," said John Pierson, thelongtime producers' representative who helped sell the film to WarnerBrothers and now teaches at the University of Texas in Austin. "But itwas disheartening to see some of the material in Debbie and Rick'sfilm. I wouldn't say I was crushed. I'm too old to be crushed. But mystudents were."

I'm glad to hear it. UT-Austin film students being taught by a Moore fan, and they're at least dismayed at Moore's dishonesty. There may be hope for them yet.

Caine described their attempts to investigate and interview the Father of Free Speech:

But according to Caine, 46, an Ohio-born journalist and cameraman, thefreewheeling persona cultivated by Moore, and the free-thinkingrhetoric expounded by his friends and associates were not quite whatthey encountered when they decided to examine his work. "Asinvestigative documentarists we always thought we could look atanything we wanted," Caine said. "But when we turned the cameras on oneof the leading figures in our own industry, the people we wanted totalk to were like: 'What are you doing? Why are you throwing stones atthe parade leader?'"