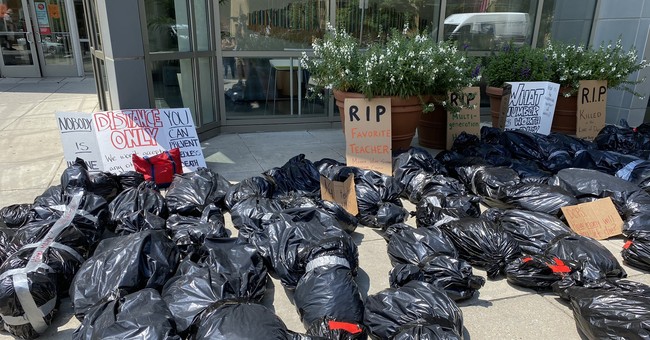 In a fit of melodrama, public school teachers in Washington, D.C. lined up “body bags” outside school system offices to protest the possibility of going back to the classroom in the fall in the midst of the COVID-19 pandemic.

A picture posted by Debbie Truong, an education reporter for WAMU 88.5, depicts the scene. Teachers filled oversized trash bags and bound them duct tape. Cardboard headstones read messages like “RIP Favorite Teacher,” “Distance Only,” and “Killed in the Line of Duty.” Mayor Muriel Bowser is expected to announce later this week whether schools will partially reopen for fall.

D.C Public Schools teachers briefly lined up “body bags” outside school system offices, protesting plans that could send them back to classrooms in the fall

Mayor Bowser is expected to announce if schools will partially open in the fall later this week pic.twitter.com/ARmqgkBfrG

Many on social media expressed disgust at the spectacle. Some suggested that teachers who did not want to work should forfeit their salary, while another pointed out that millions of employees with frontline jobs have worked through the entire pandemic.

Ok then, it’s time we defund the teachers unions and tell these teachers that they forfeit their salaries every semester they sit out. Then those monies are added together and a check is sent to every parent in that district.

I hope the teachers who did this aren’t going shopping at grocery stores, drug stores, ordering from Amazon etc. If they are then they clearly believe their life is more important than the workers at those places making sure we can continue to buy whatever we like.

Holding in-person classes has become a point of controversy in recent weeks. President Trump has threatened to withhold federal funding for those who don’t reopen, a position Secretary of Education Betsy DeVos has echoed. But many groups have pushed back, citing coronavirus fears.

A group of racial activists in Detroit protested in-person summer school classes by blocking school buses from leaving the terminal to pick up children who depended on them. The demonstrators said Detroit schools were exploiting minority children as “guinea pigs” in a “sick experiment to test the state’s ability to open schools on a larger scale.” New Jersey’s largest teachers union called for required testing of all students and staff the week prior to the start of school, mandatory testing on a weekly basis after that, and “door-to-door” mask wearing, from the bus to school and back home again. In California, a Los Angeles teachers union recently demanded defunding the police, banning new charter schools, increased wealth taxes on California’s millionaires and billionaires, and Medicare-for-All as conditions reopening.

In response, President Trump has suggested directing education funding to parents to educate their children through other avenues if schools refuse to open in the fall. If he follows through, public schools will be faced with a tough decision: keep up their coronavirus protests or succumb to school choice.