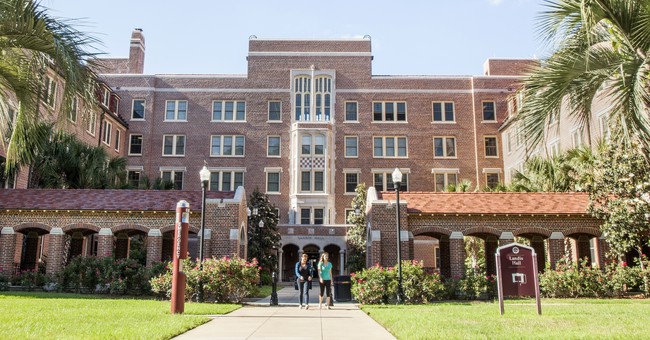 In June, the Florida State University Student Senate voted to remove then-president Jack Denton for the indefensible crime of sharing his Catholic beliefs. Now, Alliance Defending Freedom has sent a letter to school administrators appealing the student senate’s decision to oust him.

In a private GroupMe text conversation with fellow Catholic students, Denton suggested that BlackLivesMatter.com, Reclaim the Block, and the ACLU advocate for causes opposed to Catholic teaching and that Catholic students may wish to avoid supporting them financially. When asked by a member what specifically he was referring to, Denton replied that “BlackLivesMatter.com fosters ‘a queer-affirming network’ and defends transgenderism.” The ACLU, he continued, “defends laws protecting abortion facilities and sued states that restrict access to abortion.” Reclaim the Block, he stated, “claims less police will make our communities safer and advocates for cutting PD’s budgets. This is a little less explicit, but I think it’s contrary to the Church’s teaching on the common good.”

Denton was not operating in his official capacity as student senator in the forum, reported Catholic News Agency. But that didn’t stop one student in the group chat from taking screenshots of the messages and sharing them publicly on social media without Denton’s permission. The condemnation was swift. Students mocked and misrepresented his comments. One penned an op-ed in the school newspaper claiming that Denton’s sentiments “show that he holds values which are antithetical to FSU’s anti-discrimination policy and could make our school’s most marginalized students feel unwelcome and unsafe” and that his leadership position sent “a clear message” of bigotry. Another began an online petition asserting that Denton made “transphobic and racist remarks” and called for his removal because such behavior “will not be tolerated in any form at any level at FSU.”

The petition garnered more than 7,600 comments. The Student Senate held a vote of no-confidence on Friday, June 3 over Zoom in which the governing body ousted Denton from office with 86 percent of the vote. Denton had served in the FSU Student Government Association for three years, including serving as president.

“No student should fear retaliation for peacefully sharing his personal convictions,” said Tyson Langhofer, senior counsel for Alliance Defending Freedom, in a press release. “Public universities should be fostering real diversity of thought, not discriminating against individuals based on their religious convictions or political beliefs. Under the guise of creating a ‘safe space,’ FSU students banded together to cancel Jack’s First Amendment freedoms and silence Jack because of his religion, in violation of the school’s SGA Ethics Code and the Student Body Constitution.”

To compound the situation, Denton has been unable to bring his case to the Student Supreme Court because the Student Senate will not confirm the nominees for temporary justices. According to a letter sent by ADF to the vice president for student affairs, the Student Senate has stalled the confirmation process “for the purpose of derailing Mr. Denton’s complaint.” Furthermore, the letter asserts that student senators vetted a potential nominee with Denton’s case in mind, asking the nominee how she would have ruled as a justice of the U.S. Supreme Court in the cases of Obergefell v. Hodges and Bostock v. Clayton County, and expressing concern and frustration over her “limited knowledge” of the LGBTQ+ community since there was “such a sensitive case on the docket.” ADF requested that the university schedule a hearing for Denton’s appeal by July 29.

Ironically, students have called for Denton’s replacement, Ahmad Daraldik, to be ousted as well after anti-Semitic Instagram posts surfaced immediately upon his appointment. The comments, which included “F--k Israel,” “Stupid Jews,” and compared the Israeli government to Nazi Germany’s genocide against the Jews, made international headlines including the Times of Israel and the Jerusalem Post. A petition calling for his removal has received more than 10,400 signatures but, so far, Daraldik remains president.

Conservative and religious students are increasingly coming under fire for their beliefs. Just this week, Townhall reported that Austin Tong, a student at Fordham University, was placed on disciplinary probation for the remainder of his college career and prohibited from setting foot on campus after he posted a picture of slain police officer David Dorn and expressed support for the Second Amendment. Tong is now suing Fordham. Perhaps Denton will do the same.