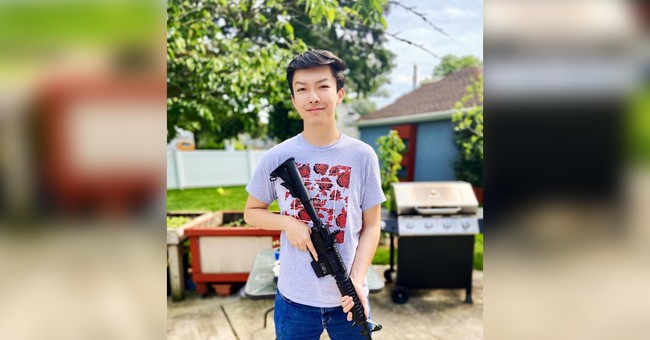 A Fordham University student is suing his college after the institution found him to be in violation of the University Code of Conduct and Residential Life Policies. His crime? Showing support for the Second Amendment and a fallen police officer.

In the midst of the protesting and rioting following the death of George Floyd, Austin Tong, a rising senior at Fordham, took to Instagram to share his frustration over the failure of the Black Lives Matter movement to recognize the murder of David Dorn, the 77-year-old African-American retired police captain who was shot while protecting a friend’s shop from looters. “Y’all a bunch of hypocrites,” he captioned with a photo of Dorn.

Y’all a bunch of hypocrites.

“YOU are part of the problem!” one wrote. “YOU are bringing divide in this country. It’s obvious you haven’t even done your research before even posting this.”

“This is really tone deaf and ignorant,” another commented. “You shouldn’t use this man to further your agenda if you were silent about the scores of other unlawful black murders before.”

“This is so embarrassing for you,” still another said. “To blatantly disrespect such an important movement that’s literally begging a historically racist system to stop killing black people is so unbelievably tone deaf and I can’t even begin to wrap my head around the fact you thought this was ok.”

But Tong didn’t back down. The next day happened to be the anniversary of the Tiananmen Square protests and Tong, who immigrated from China as a child, posted a photo of himself holding a rifle in his backyard with the caption, “Don’t tread on me” and the hashtag #198964, the date of the protests.

“A picture of you holding a gun with the words ‘don’t’ tread on me’ is easily interpreted to mean that you intend harm on those who don’t agree with you,” one student said.

“STUDENTS DON’T FEEL COMFORTABLE RETURNING TO A CAMPUS WHERE STUDENTS THREATEN OTHERS WITH GUNS FOR HAVING DIFFERENT OPINIONS,” another asserted.

Students repeatedly tagged the university’s Instagram account demanding Tong’s enrollment be revoked and succeeded in getting the school’s attention.

“Hi all,” Fordham commented. “The University is aware of this post. Thanks for the mentions.”

According to the college’s newspaper, the comment received 145 likes and over 20 students requesting that disciplinary action be taken.

And take action they did. Just four days after Tong’s Tiananmen post, Dean of Students Keith Eldredge contacted Tong to inform him that the school was opening an investigation on him for violating university regulations for hate crimes, threats/intimidation, and disorderly conduct. On July 14, Fordham University issued its sanctions against Tong, which he described as “Soviet-style”:

In response, Tong posted the letter the school sent him along with a letter of his own declaring that he would not be intimidated by the school or his peers. He has also announced that he is suing the school and plans to fight it to the end, even if it means going all the way to the Supreme Court.

I will be taking legal action against @fordhamuniversity, if not given a fair and just answer.

"America is under attack,” Tong wrote. “Americans are being silenced. I hope to use my punishment as a milestone and reflection of the constitutional crisis we are facing today as a society."

As he points out in his letter, Fordham is a Jesuit university whose own code of conduct states that it protects “freedom of expression and the open exchange of ideas.” Similarly, Fordham’s mission statement claims that the college “guarantees the freedom of inquiry required by rigorous thinking and the quest for truth.” Furthermore, Fordham’s Demonstration Policy notes that the university is “a place where ideas and opinions are formulated and exchanged” and that every student “has a right to freely express their positions and to work for their acceptance whether they assent to or dissent from existing situations in the University or society.”

"Whether you are Republican or Democrat, no matter what race, gender, or religion, the Silent Majority shall no longer be silent,” Tong continued. “We must rise against this oppression, and take back this nation."

The Foundation for Individual Rights in Education (FIRE) has sent a letter to Fordham urging them to rescind their disciplinary sanctions.

"When Tong immigrated to the United States from China at six years old, his family sought to ensure that he would be protected by the rights guaranteed by their new home, including the freedom of speech and the right to bear arms,” the letter states. “Here, however, Fordham has acted more like the Chinese government than an American university, placing several sanctions on a student solely because of off-campus political speech."

FIRE has given the university until Tuesday, July 21 to respond. In the meantime, Tong has started a GoFundMe to raise money for the legal battle ahead.

Share this on Facebook
Tweet
Cuomo's Groping Accuser Willing to Take a Polygraph, Requests He Take One Too
Landon Mion
GOP Members Demand Data from a CDC 'Sowing Confusion and Distrust' on Mask Guidelines
Rebecca Downs
A Lot of Health Care Workers Are Refusing to Get the COVID Vaccine...The Reasons Are Not Shocking.
Matt Vespa
NYC Business Owner Lays Out How Another Mask Mandate Will Crush Surviving Stores