Kaepernick, Disney Team Up for ESPN Series on Social Justice 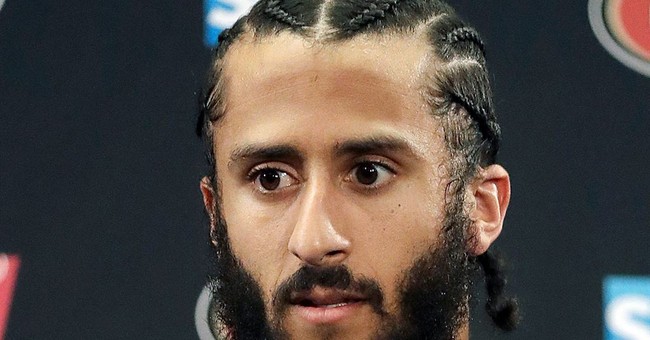 Disney has joined forces with Colin Kaepernick, the former NFL quarterback turned social justice warrior, to promote his story in an upcoming documentary series for ESPN, the company announced Monday.

The project, which will span all Disney platforms including Walt Disney Television, Hulu, and Pixar, will “focus on telling scripted and unscripted stories that explore race, social injustice and the quest for equity, and will provide a new platform to showcase the work of Black and Brown directors and producers,” according to a press release. Kaepernick will be the first individual to be featured on the show.

Kaepernick tweeted that he was “excited” to share “culturally impactful and inspiring projects:”

I am excited for this partnership with Disney across all of its platforms to elevate Black and Brown directors, creators, storytellers & producers. I look forward to sharing culturally impactful and inspiring projects. https://t.co/MXidGoWXNZ

The lineup of producers for the show includes Jemele Hill, a contributing writer for the Atlantic who previously worked for ESPN. Hill recently came under fire after she attempted to “cancel” Barstool Sports, a sports and pop culture blog, for founder Dave Portnoy’s past controversial comments about Colin Kaepernick. Instead of apologizing, Portnoy posted a viral Instagram video in which he stated that neither he nor his company would “bend the knee” to the cancel culture mob. The site then proceeded to call out Hill’s virtue signaling by unearthing an old tweet in which she made a joke about transgender people. Hill also made headlines when she refused to accept the FBI’s findings that the noose in NASCAR driver Bubba Wallace’s garage was actually a garage pull.

“Colin’s experience gives him a unique perspective on the intersection of sports, culture and race, which will undoubtedly create compelling stories that will educate, enlighten and entertain, and we look forward to working with him on this important collaboration,” Iger said in a statement.

Kaepernick has proven himself adept at grabbing the spotlight despite being off the football field since 2016. Since kneeling for the National Anthem, Kaepernick has been featured on the cover of Time magazine, was named “Citizen of the Year" by GQ magazine, and partnered with Nike for its now-infamous advertising campaign, “Believe in something, even if it means sacrificing everything.”

While many on social media praised the announcement, others expressed disgust and pointed out the irony of Kaepernick’s claims of oppression while making millions:

Between his NFL settlement, Nike deal, and now Disney, Colin Kaepernick has made an absurd amount of money by claiming that his country is irredeemably racist https://t.co/E3lhLpgZVR

Someone please save Colin Kaepernick from all this oppression!?? pic.twitter.com/1HdWwg9R9T

And he’s lecturing us about how unjust America is.

After Nike made Kaepernick the face of its 2018 marketing campaign, the company lost $3.75 billion. Only time will tell whether the same fate awaits Disney.