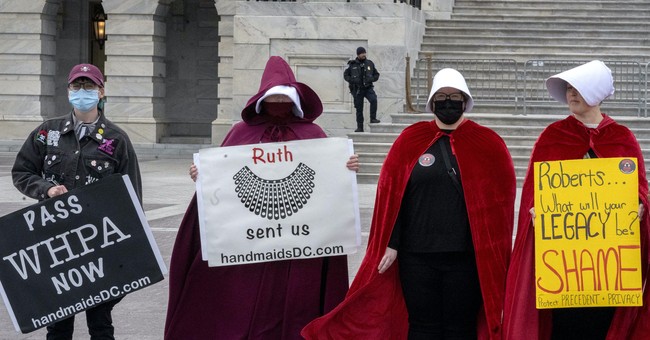 The Washington Post columnist Henry Olsen published an op-ed on Tuesday calling out Democrats for being the “real extremists” on abortion.

“Democrats are salivating over the chance to portray Republicans as antiabortion extremists in the wake of the anticipated overruling of Roe v. Wade,” he wrote. “But their unwillingness to accept limits on late-term abortions shows they are the real extremists.”

Olsen went on to describe how latest polls show that Americans are overall not in favor of third-trimester abortions. A poll conducted by Economist-YouGov found that 25 percent of Americans agree that abortion should “always be legal” with “no restrictions.” However, Democrats like Sen. Chuck Shumer (NY) support legislation that would make abortion legal without restrictions. And, an ABC News-Post poll found that 60 percent of Democrats believe in no abortion restrictions at all.

Olsen pointed out that several prominent Democrats, including White House Press Secretary Jen Psaki and Ohio Senate candidate Rep. Tim Ryan, have dodged questions about what limits on abortion they would support.

“In politics, if you’re avoiding a clear answer to a question, it’s usually because you don’t want the public to know what it is,” Olsen wrote.

Democratic candidates and officeholders, therefore, must tread carefully if they want to make the purported extremism of Republicans an issue. If Democrats express support for their base’s view, they give Republicans a potent issue to use against them. If they express support for the view backed by most Americans and almost all swing voters, they anger that base. Hence the abortion shuffle played out before audiences every day.

That’s just not going to fly, especially in critical races. Republicans will force this question at every opportunity and throw every vote in favor of the Senate bill this week in Democrats’ faces. The more a Democrat tries to waffle, the more foolish they will look. It’s pretty clear to most Americans that a child who can live outside of a mother’s body shouldn’t be killed. The fact that too many Democrats can’t say that without fear of getting ambushed by the left speaks volumes about today’s Democratic Party.

Olsen cited a pro-abortion writer who found that 90 percent of abortions are performed in the first trimester of pregnancy. Despite this, Democrat lawmakers continue to push legislation that allows abortion throughout all nine months of pregnancy. He said that Republicans, ahead of the midterms, should bring up abortion and get their Democratic opponents to answer questions pertaining to the issue.

“Republicans this fall should be as persistent as Lincoln in forcing their foes to choose on abortion between the American majority and the Democratic base,” Olsen concluded. “If they do, they should be the political winners, against all expectations, on the abortion debate.”