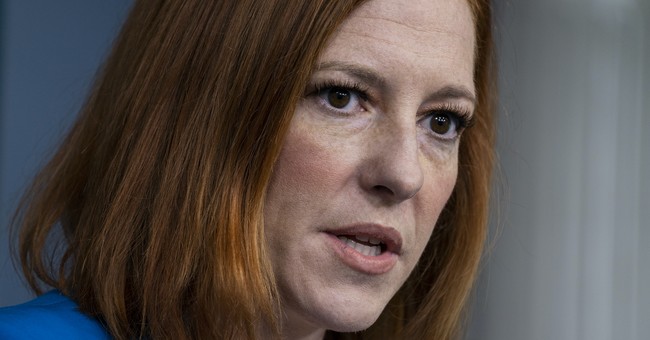 In Wednesday’s White House press briefing, Psaki brushed off a reporter’s question on the Biden administration’s concerns over “kids’ mental health” and effects on human behavior resulting from forced masking.

“It’s important to note that masks are effective at reducing transmission in schools and other places,” Psaki told reporters. “We know that from what the data has told us, right?”

Reporter asks Psaki if Biden takes into account “kids mental health” when it comes to forced masking in schools.

Psaki later said “we [the Biden administration] understand where the emotions of the country are” and that “people are tired of masks.”

Psaki quickly flipped and said that “if you look at the polling, though, there is also a huge chunk of people who still want masks.”

When reporters pressed her on the subject, Psaki stated that the White House gets their guidance on COVID-19 mandates from health experts in the federal government. She did not elaborate on how forced masking in school might be affecting children or a timeline when federal guidelines around mask mandates might change.

Earlier this week, as Katie covered, Psaki said that the administration’s “guidance is very clear, which is that we recommend masking in schools.” This came after Democratic governors in Oregon, Connecticut, New Jersey, and Delaware announced the end to mask mandates, including in schools. Additionally, Katie noted that a U.S. Centers for Disease Control study justifying forced masking in schools was “deeply flawed.”

REPORTER: "If you could just clarify...do you think that at some point in the future...it would we appropriate for there to be updated federal guidelines" on masking in schools?

PSAKI: "The guidance is very clear, which is that we recommend masking in schools." pic.twitter.com/Fy5vpIk7HS

In a statement to Townhall, House Minority Leader Kevin McCarthy (R-CA) pointed out that the Biden administration is “leading from behind” when it comes to COVID-19, as several Republican-led states have ditched mandates, returned to normal, and now some Democratic states are falling in line.

“As has been the case throughout the past 12 months of President Biden’s presidency, his administration is once again leading from behind. Republican-led states have long reopened and dropped mask mandates, and this week we even saw some of the most liberal governors finally follow suit,” McCarthy said. “But despite the urgency to return to normal that is being demonstrated by both the science and the sentiment from the American public, the Biden’s Covid response team is digging in on their policies of keeping kids in masks and keeping our citizens in isolation.”

As Rebecca covered, other liberal states that announced the end to mask mandates this week include California and New York. However, both states are maintaining mask mandates in schools.

Katie reported this week that the reason behind the Democrats’ sudden flip-flop on masks came after focus groups and polling showed voters “shared frustrations over public health measures” and that there was “a deep desire to return to some sense of normalcy.”

Following New York Gov. Kathy Hochul’s announcement on mask mandates, New York Rep. Sean Maloney (D) said on Twitter “Democrats’ policies have helped get us through this pandemic” and “it’s time to give people their lives back.” Except if you’re a child in school, that is.

Thank you to President Biden and Governor Hochul for getting us to this point. We are making tremendous progress thanks to their strong, science-based leadership.

I fully support the decision to roll back mask mandates.

“People are fed up with this administration’s fear mongering, data-defying logic, and government bureaucrats who want to control people’s lives,” McCarthy said. “We must restore normalcy – Americans want to get back to their pre-pandemic lives.”