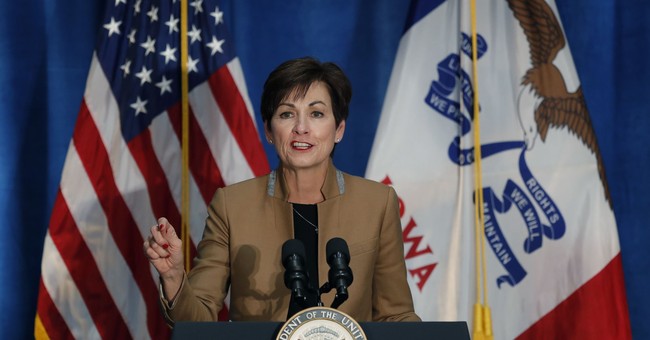 Reynolds, who assumed office as Governor in 2017, made the remarks on Monday in a message published by the pro-life organization Susan B. Anthony List (SBA). On Wednesday, the Supreme Court of the United States’ (SCOTUS) will hear oral arguments for Dobbs, which surrounds the constitutionality of a 15-week abortion ban in Mississippi. Dobbs is the first SCOTUS case in decades with the potential to overturn landmark abortion cases Roe and Planned Parenthood v. Casey, which occurred in 1973 and 1992, respectively.

"For years, democratically elected representatives in our states have tried to defend innocent human life in the womb only to be prevented by these incoherent decisions," Reynolds said in the message.

“By disregarding state’s sovereignty, Roe and Casey have killed millions of unborn children,” she added.

“On Dec. 1, the Court will hear oral arguments in the Dobbs case, it’s best opportunity yet to undo it’s fatal mistake. The question in the case is simple. It lies in the heart of the American experiment. Does the United States Constitution require states to withhold legal protection from an entire class of defenseless human beings?” Reynolds continued, noting that the Constitution does not protect abortion.

“Roe and Casey ruined even the most basic legal protections for these vulnerable Americans. They place our nation’s abortion regime on a global fringe, more in line with China and North Korea than most in Europe. The American people have had absolutely no say in this extreme abortion deregulation. If they had not been silenced, there is no doubt that many states would follow Mississippi’s lead.”

As I covered, in July, the pro-life Charlotte Lozier Institute published a study that showed how abortion laws across Europe are more restrictive than the United States. For comparison, most European countries limit abortion to 12 weeks.

“No European nation allows elective abortion through all nine months of pregnancy, as is effectively permitted in several U.S. states, and America is one of only a small handful of nations, along with China and North Korea, to permit any sort of late-term elective abortion,” CLI associate scholar Angelina B. Nguyen said. “Mississippi’s law brings the United States a small step closer both to European and global norms.”

To wrap up her message, Reynolds pointed out that the majority of Americans reject abortion on demand, reject using taxpayer dollars to fund abortion, and reject the notion that the Constitution protects abortion.

“Americans strongly reject abortion on demand until the moment of birth,” Reynolds concluded in the video. “With Dobbs, the Supreme Court can strike a blow for democratic self-government, restore constitutional integrity, and right a historic wrong.”