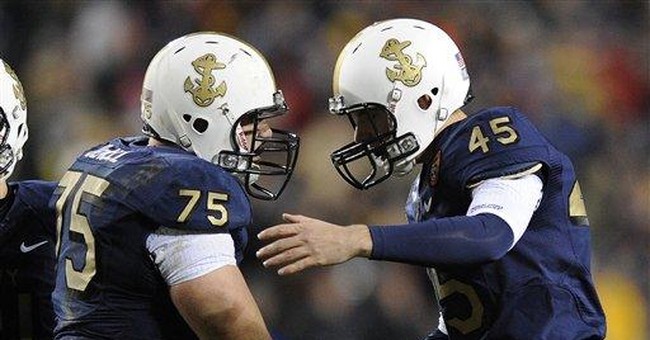 United States Naval Academy football coach Billy Ray Stutzmann was fired this week after refusing to get vaccinated against the Wuhan coronavirus, he said Monday.

In a lengthy statement shared on Stutzmann’s Twitter, he explained that the Naval Academy Athletic Association requires all coaches and staff to be vaccinated against COVID-19. Stutzmann stated he could not comply with policy due to his religious convictions. He sought out a religious exemption and attempted to negotiate other working arrangements with the Navy but was ultimately relieved of his duties.

“The Naval Academy Athletic Association policy regarding COVID-19 requires all coaches and staff to be vaccinated against the virus. Based on my religious convictions, and after much thought and prayer, I am unable to follow the requirements of the Naval Academy’s Covid-19 policy, as it has changed these last few months. After applying for a religious exemption and attempting to further negotiate alternative working arrangements, I was ultimately relieved of my duties here at Navy. I continue to stand firm in my conviction of faith, but I understand and respect that each individual and institution has a choice on how they wish to manage these issues. I wish Navy Football nothing but the best in the future.”

Stutzmann joined USNA as an offensive assistant football coach in 2019. Before working for Navy Midshipmen football, he served as an offensive intern for the Rainbow Warriors at the University of Hawai'i at Manoa.

“I am incredibly thankful to have had the opportunity to coach at the United States Naval Academy for the past two seasons under Head Coach Ken Niumatalolo, where I have learned from one of the best in the business,” the statement reads. “Coaching at the Naval Academy is a rare opportunity to build bonds with those who share a love of football and an even greater love for service to others. I will continue to be blessed to see the impact these players will have in service to our great country upon their graduation.”