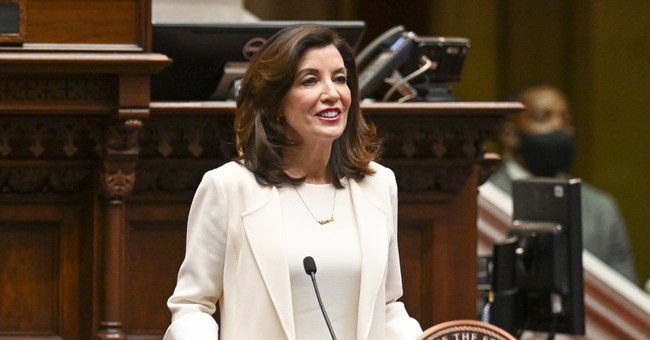 The New York state Supreme Court struck down Gov. Kathy Hochul’s mask mandate on Monday, with Judge Thomas Rademaker ruling that it violated the State Administrative Procedure Act and is therefore “null, void, and unenforceable as a matter of law.”

Without getting the approval of state lawmakers, the judge said the Democratic governor and state health officials lacked the authority to enact the mask mandate for public locations and schools.

“There can be no question that every person in this State wishes, wants and prays that this era of COVID ends soon and they will surely do their part to see that is accomplished,” Rademaker said in the ruling. “However, enacting any laws to this end is entrusted solely to the State Legislature. While the intentions of Commissioner Bassett and Governor Hochul appear to be well aimed squarely at doing what they believe is right to protect the citizens of New York State, they must take their case to the State Legislature.”

The unelected governor said they “strongly disagree with this ruling, and we are pursuing every option to reverse this immediately.”

???? My statement on the New York Supreme Court ruling against mask mandate ???? pic.twitter.com/JpsJzgCbOW

New York's mask mandate was just ruled "unconstitutional," and declared it "null, void and unenforceable" according to a ruling by a NY State Supreme Court judge

The Unelected COVID Regime is crumbling before our eyes. Keep the pressure on.