Why Supply Chain Issues Will Likely Get Worse 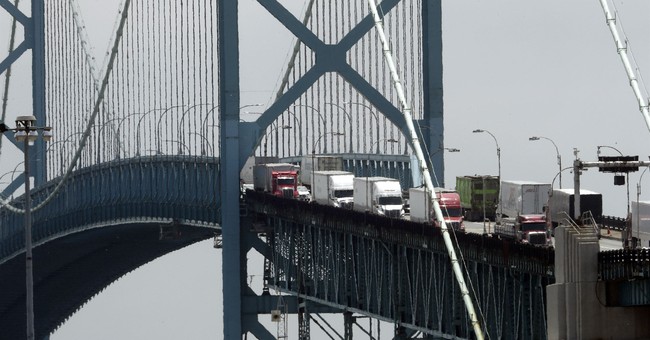 Supply chain issues may get worse now that Canada’s mandate requiring U.S. semi-truck drivers entering the county be vaccinated has gone into effect.

With only between 50-60 percent of U.S. truckers vaccinated against Covid-19, companies are facing a logistical nightmare.

“Automatically we drive our cost of transportation through the roof because our efficiency has gone out the door,” Brian Hitchcock, president of the Michigan Trucking Association and CEO of MBH Trucking, told WILX 10, noting that only half his drivers who have the Canadian routes got the jab.

“The driver that’s vaccinated comes across the border unhooks, takes an empty, and goes straight back. He doesn’t deliver the load here in Michigan. We’ll have an unvaccinated driver delivering the load,” he said.

Canada is one of Michigan’s largest customers. Before the vaccine mandate, $45 billion worth of goods crossed the U.S. - Canadian border every month. […]

Hitchcock said this means things like food and car parts are going to get harder to find and cost more. And things will only get worse. (WILX 10)

“We have to look at how long we can do this and there’s already a shortage,” Hitchcock said.

[Betts] He noted that auto parts come from all over the world and one obstruction in the chain can significantly slow or stop production.

“By the time you map out the supply chain, it’s just a spider web going everywhere,” he said.

“I would be surprised if there are any (U.S.) cars that don’t have at least one Canadian-based part. Canada is a pretty important part of auto manufacturing,” Betts said. “Any part that doesn’t arrive or if there’s something wrong with it, you can’t build it. There’s more points of failure.” (NBC)

While Canada dropped its vaccine mandate for truckers, the country is still requiring drivers from the U.S. to be vaccinated or else they’ll be denied entry at the border. The mandate went into effect on Saturday.

The United States, meanwhile, has a similar mandate set to take effect Jan. 22 requiring all essential travelers who cross land borders to be fully vaccinated.